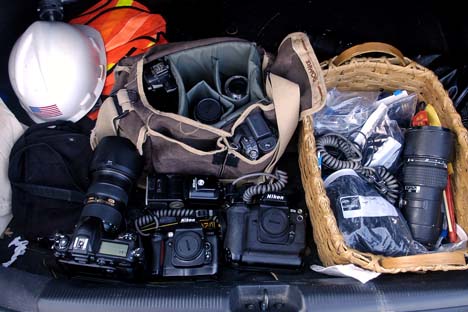 Probably there are some who are bored to hear this again and again, but this advice can spare people terrible headaches! There has been another theft, that could have been avoided. Photographers share the list of stolen goods in hope of someone finding it one day. Hope is good, but prevention is much more helpful than crying after something avoidable bad happened.
I hope you don’t leave valuable gear in the car!

“Trust God, but close your car!” – goes the saying Photographers steal from each other
Click image for more!

Prevention is the most important
Hope never dies, sharing the list of stolen goods is important to help it get found (you find the latest list at the end of this post). It may help both police and the victim of the theft too to find the missing goods. However the photographer society benefits much more from drawing the right conclusions and after a large number of cases, you start to learn never to leave your gear in the trunk. Not even for the short time we go to the toilet or order a coffee. If you have high-value gear with you, then you should skip the detour or take the gear with yourselves. Yes, a bulky and heavy camera bag makes it harder to move around.
I confirm it can be very hard to take everything with you all the time. Especially after full or even multiple days of hard work dead tired amid a long and exhausting drive home. Even harder (or some times clearly impossible) if you have not only a camera and some lenses, but also have a trunk full of lights, stands and a fully equipped studio folded into your trunk. But if you have no one with you to watch out for them until you need to go, then at least take the most important and most valuable things. First and foremost the unreplaceable things like the perhaps not even downloaded photos on your cards and the probably not backupped photos on your laptop.
Even if you decide to take a risk in favour of your comfort and you don’t take the entire gear with yourself to the toilet, it is still worth to take out and bring with yourself at least the full cards and the laptop. I think to take at least the camera on your shoulder with a lens, but even an entire camera bag is not such a great burden. Especially compared this to all the discomfort you may have when the gear gets stolen and you need to replace it and work in extra to collect the money to be able to replace it. In prevention, it also has a great deal as I wrote in a separate post to have a list of all the serial numbers of your gear. Without this info, it is much harder to press charges at police in case the bad thing happens. Many people don’t do it, despite it is much easier to write or update the list of serial numbers on the fly when you buy new things or just now when you have them with you. You will have a much harder task after the fact when the bad things happen and you will have to dig up boxes, invoices, photos and other things to recover what the serial numbers might have been.
With a case of intentional or even planned theft, it doesn’t change anything, but definitely can help in many other situations what I suggest in another of my blog posts label your gear with name and contacts! You can install a safe into the trunk
It is very important to point out the trunk is not a safe in itself. However hard it becomes for you to open it when the lock gets jammed, a skilful thief will have much less trouble with it.

Especially those who drive around a lot with their gear in the car may use some very special solutions to make it harder to grab the gear and go with them. Thieves usually try to work as fast as possible, so as much you can slow it down and make it more complicated to remove your things the greater the chance they will give it up and leave empty-handed.

The simplest solution is to place your items around in as many different places as possible. This way at least they are not collected into one place in one visible place and have more chance to at least some of them to avoid the attention of the most probably rushing thief. To cover them with various items of clothes can also increase the chance of at least some of them not being noticed and left there. In many cars, there are more or less hidden storage places in either the bottom or the side where you can fit a lot of things under the seats as well without being noticed.
I have heard of photographers installing a security chain or wire connected to solid parts of the car (someone lead the chain through the bottom of the car and attached it to the chassis for added security) to chain their belongings to the car this way.
I even heard of some foreign colleagues who put a lockable Peli travel case in the trunk chained to the car the way mentioned above. These solutions are all capable of making thieves work harder. Of course, the chains and locks can all be cut or opened somehow. The question is how prepared the thief is and how much time they spare for it – most probably they won’t hassle too much for things not easily removable. Together with the car, they can take everything in one step. So attaching anything to the car has only any point if you have an immobiliser security system in your car. Safe in the trunk
Photo provided by a reader

There are some companies who manufacture safes designed to be installed into the trunks of cars. One Hungarian colleague choose a much simpler solution and bought a 30 kg room safe and installed it into his trunk. Some screws attach it to the car and it is heavy enough to discourage anyone trying to run away with it. If needed however it can be unmounted from the car (from the inside, once the safe is opened) and can be even put into another car. This safe is not too much larger than a camera bag, but it can hold the most expensive pieces. If you have immobiliser it can provide enough protection to prevent theft from the car and even together with the car too. Those who have much more gear than fits into this safe and aren’t satisfied with only a part of it being closed away can also buy a larger safe for the trunk.

Many photographers lost their gear this way
When I first published this post someone published his list of stolen gear on Facebook, that started spreading in the form of a chain mail (since then more similar events happened you can read these updates at the end of this post). This story and those followed all were about a colleague having his entire gear being stolen. Including his expensive cameras, lenses, flashes, studio lights, everything. He, just like many others do stop at a car park got out of the car to go to the toilet and by the time he finished all of his stuff was taken. However, the story doesn’t mention it but based on the amount of stuff it is also possible all of it was taken together with the car because it is much easier and faster than to move everything piece by piece. The key is the equipment, what for a professional photographer is a tool of the trade, needed for his work and now he doesn’t have it any more. Also, it is a really great expense – not to mention time and energy – to get them all replaced.

Some got stolen more than once
Once, when I was still working in commerce selling cameras years ago (more like decades now) I had a buyer who told me his story of having his camera gear stolen from the car five or six times. Some of these occasions were only his bag taken from the car, but other times they took it together with the car. As he says the last time the gear was more expensive than the car. Moral of the first-hand experience
Somewhat later another colleague Peter Lang  shared his inconveniences on Facebook. He also became a victim of stealing his full camera gear from the car. He summarised the moral of his story this way (translation by me):

“It could have been avoided with minimal precaution. Of course, we never leave the car unattended. If you do you should at least put valuables in different places. I too have a small box under the trunk, but you can put things under the seats, the iPad would fit between the backs of the seats. With all this, I could have at least decrease my losses, because they would not take everything at once. Thieves among us photographers
Click image for more!
Photo by Attila Volgyi / blog.volgyiattila.com

I would also emphasize, how important it is to make backup copies of the photos. Thanks to the routine I developed during the years of experience, I don’t have to call anyone to shoot the material again. I have been on the road for 3 days then and I had 2 photoshoots on the notebook. Thankfully I downloaded them on the location of the shoots a left it on the hard drive of a colleague. take care of your gear and your work.”

During the common travels together with other photographer colleagues, it is a common topic to discuss this. Some are more confident (or maybe unwary?) and they aren’t afraid to leave their gear in the car at a petrol station or maybe even in a less secure street parking without any cameras. But many learned their lessons either from their own experiences or learning it from others’ misery: never leave your gear in the car! Update: In November 2017 Hungarian YouTuber duo Pamkutya posted on Facebookon their story how their car window was broken in the 7th district of Budapest while they were shooting a video and the thief stole their drone from it. The post got over 2600 shares and local news sites also wrote about it, because they offered 200 thousand forints (roughly €600) ransom for the finder. I never heard about the drone getting found ever since then.

In February 2020 another photographer published a gear theft from car story. He also got his complete gear stolen including multiple cameras, a complete line of lenses. All while he went into a fast-food restaurant. Moral of this story is the same this time too: never leave your gear in the car! (It is only a minor correction the original article’s title needs to mention it was no robbery just a theft, what is a completely different level of crime with a different punishment.)

Our photographer colleague on his way home stoppet by a fast fooddd restaurant for a coffee. During this time his car was broken up and his high value Nikon gear listed below was stolen.

Police riport was filed, but who meets any of the items on the second hand market, please call us: