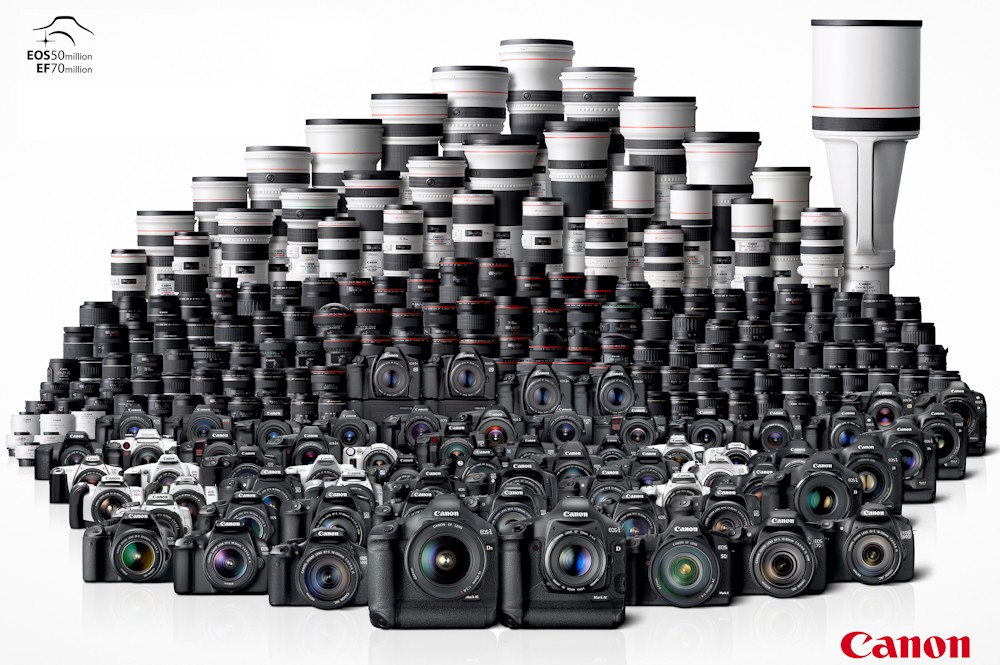 Now the number of produced Canon lenses is really over 90 million. In August 2012 I only wrote this number as a typo in May 2013 I do it based on facts. By February 2014 they made the 70th million EOS camera too. The rest of my writing is still to the point.

In May 2013 Canon announced their production reached 90 million EF lenses. This is news hard to add any valuable to. But it still gets me thinking. It is a good opportunity to publish some  gearporn photos on my blog, as it always comes handy.
I originally published the post stating 90 million lenses back in August 2012, however they only had 80 millions then.  In May 2013. they really reached the 90 million. Thanks to those wo warned me of the typo. I could say it was intentional, but it would not count. In reality I was mistaken….but this doesn’t change anything. Actually it doesn’t matter 80 or 90 million lenses were made. Contunue reading why I think this!

It doesn’t really affet the lives of any of us. It doesn’t have any meaning if a camera manufacturer produced 70, 80 or 90 million lenses (or even more). Doesn’t matter with any of the manufacturers Does anyone know how many iPhones, iPads were made or sold (of course we do as similar meaningless statistics wre published by all the companies), televisions or even bank notes were produced by now? And does anyone care about it at all? Come on!
And these numbers cannot be double checked like it is requested by journalism ethics. We cannot count them and noone else knows this information just the manufacturer. I bet not even the manufacturer itself knows the exact number. Probably they themselves only estimate based on used materials and production statistics. Of course it would be possible to count each product in a factory. Japanese have a reputation for preciseness. But I don’t really believe they kept on counting 90 million pieces during 25 years without any errors. And what does it count if they did make a mistake in numbers? Also this  90 million also contains the ,   god knows how many items that are lying on a shelf without anyone to buy them, worn off, unrepairable, lost, broken, burnt, etc. So we can be sure there are no 90 millon EF lenses in use.

This is exactly that type of news that can only strengthen the public opinion about a brand. Especially this announcement came just after Nikon announced their 70th million lens. Some times a company publishes such an announcement and photography sites either publish it in whole or they try to add some custom writing to change some of the text compared to others also citing the same number with the same photos.
Those who belong to the herd of brand fans can feel confirmed in their decision of choosing the brand. They hope 90 million flies may not be mistaken. Those who believe in the supremacy of other brands may start thinking if 90 million flies aren’t mistaken so it may be time to think about switching over. Even if – a least I hope so – we all know deep in our hearts this really doesn’t count at all.

I don’t understand one thing
I don’t understand if they regularly publish such news at Canon – so it cannot be a spontaneous thing. Why on Earth don’t they publish photos of lenses and cameras in large numbers? Not the whole EF lens lineup, with one lens and camera of a model.
It could be a lot of the ame lenses next to each others, like Coke bottles on the manufacturing line. Just like the loaner gear a the London Olympics CPS locker shelves. More like on the manufacturing line, on a pallet, in a crate or lined up in a studio like in their general product shots, just with a message of having millions of them out in the world. I really miss these photos. In part because reaers like these photos. In part because it would much better emphasize the message there are really a lot of lenses and cameras not only one or two of a model.

Since there are only such photos on the web (with tens of millions smaller numbers writeten on them), I can only share these with you. Well these look good as well….but how much better it could be to document the manufacture of these beauties, how many of them there are and how good they look in such great numbers.
I’m sure it could be a really visual photo essay and it could be much greater advertisement for the company than a boring list of numbers citing in which year how much more they produced. I hope they manage to make something similar for one of the next tens of millions of their products celebrated.
If they don’t have any idea whom to ask to do it, I can suggest some talented photographers. However not all of them uses Canon, but it is possible to find some Canon users among them – I can even help them if they can’t do it without help. But I think around Canon there is an abundance of Canon users. I really don’t understand why they don’t have such phtoos.

Update: The timeline in the post is updated regularly. I didn’t include in the list that on 10th November 2015. the 80th million EOS body of course was Canon’s current favourite product the 50 megapixel 5DsR.

October 2019 celebrates the 100th million Canon EOS body that belongs their current EOS R system. Together with this the company announced Canon Camera Museum to showcase all their still and video camera products made during all of their history.

What resolution we need and where is the limit?