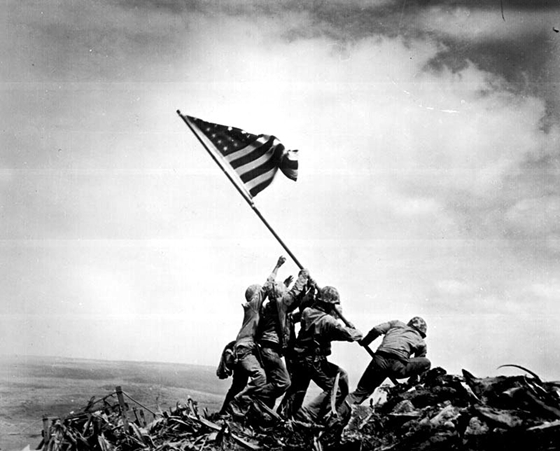 When I write this post TV airs again the movie about the background of one of the most memorable photos of the history (not only military history) of the US. The title is none other than Flag of our Fathers. The battle at Iwo Jima on the Pacific war scenes of World War II shot with the eye of the special director Clint Eastwood.

Let’s get to know better the photo of the marines raising the flag and the interesting story behind this photo – and the movie that tells much more about not only the photo, but it’s an afterlife and these times in the USA.

Steven Spielberg is known to have much experience with mass troop landing and other historic battle scenes. Hollywood’s big gun Clint Eastwood who is not only a gunslinger any more. They joined forces to show us an important piece of war history in a very special way. 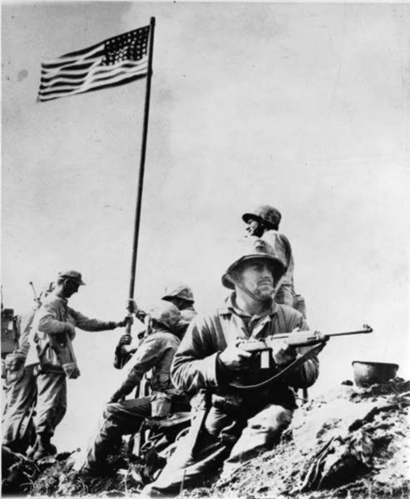 About the circumstances of taking the photo Hungarian news site, HVG wrote a detailed article (unfortunately only available in Hungarian) when the movie was aired the last time on TV. The military tactics were detailed by Lemil Blog. They are both worth reading because they both serve with a lot of interesting details. One being the first flag was smaller and erecting it wasn’t that visual. This lead to the idea to erect a larger one. Officers originally wanted to have the same soldiers on the second picture, but they could not find them all on-site. The erection of the second photo – and movie recording – became world-famous and even more than that a symbol of bravery. John Rosenthal won a Pulitzer-prize in 1945. Copies of it appeared in endless numbers, just like InPhoto blog tried to compile all of them. Based on the photo there were stamps, coins, statues and other derivative works were made. Definitely, the most famous sculpture is the one standing in Washington DC marking the heroism of fallen US soldiers and their final resting place.
I somewhat regret the HVG article only displays Wikipedia as a source under the photos, but at least they make it clear in the text who made the photos. Once their work became world-famous (or some used it), every creator deserves to have their name displayed next to the image, just where it should be.
This photo and its story necessarily brings back memories of the similar photo taken at the liberation of Berlin and setting up the Russian flag.

Bill Genaust’s archive movie recording of the flag-raising can be found on Wikipedia. 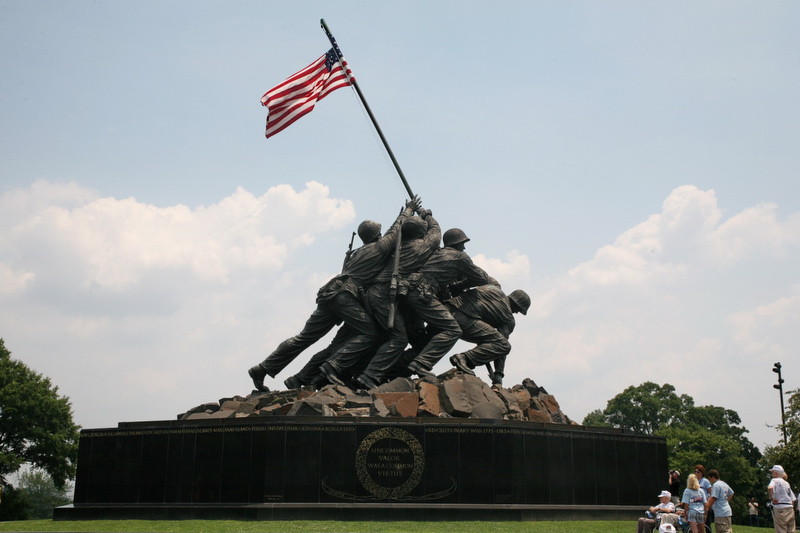 The film itself is very interesting. Just like its counterpart. Clint Eastwood and Steven Spielberg as producer shot the other side of this battle from the other viewpoint: how the Japanese saw the events.
In the movie Flags of Our Fathers, we see the events and their aftermath with the eyes of the US soldiers. How the average marines in the movie became heroes, and then later how media, military commanders and politics used them for war propaganda and where this leads them in their own personal lives.

The trailer of Flags of Our Fathers:

In the other movie titled Letters from Iwo Jima Eastwood shows what hopes Japanese soldiers had and how they marched into losing the battle. A critic of Aron Balazs appeared in Hungarian Orange concludes: “Luckily Eastwood possesses the needed wisdom and experience to set the star-spangled flag-waving aside and be able to feel unbiased hate for his own kind.” This one perfectly completes the other movie. I don’t really understand how the two movies can be separated – however, double the length and intensity could be way too much for anyone. Flags of our Fathers was only nominated for two Oscars and a Golden Globe. Letters from Iwo Jim did win an Oscar and a Golden Globe out of the four Oscars and two Golden Globe nominations. The two movies were published together in a five disk set of DVD-s.

Update: A leading actor in Flags of our Fathers was Ryan Philippe who played with camera in hand in more than one movies. The most memorable certainly being Bang Bang Club, where he plays Greg Marinovich (who has also been a topic on my blog).

The Trailer of Letters from Iwo Jima: