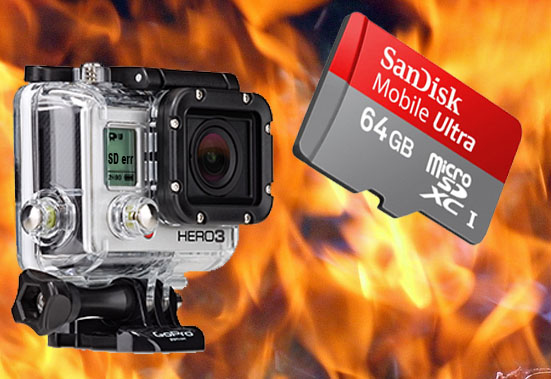 Another problem has been discovered with the newest generation of the GoPro action cameras. They fry the 64 GB MicroSD cards, not only erasing all material contained on them but also rendering the cards totally useless.  Better brand cards do get replaced in warranty but that’s more  consolation, not  solution.

PetaPixel and other sites have pointed to GoPro forums as a place where users discuss their experiences of this new glitch with the latest GoPro Hero3 Black cameras. It’s a much more serious problem than the one I discovered recently, but I can honestly say I’m quite glad I have  no personal  experience of it to recount.
Those who did come up against were using the camera with 64 GB MicroSD cards, the largest capacity the camera supports (in theory). Fortunately it is doesn’t happen often that someone spends money on such expensive huge capacity cards and, so far, smaller capacity cards seem to be working fine.  It’s a bug of unknown origin which renders cards stone dead, not in an instant hit, but in an underhand way,  sneaking up on the user. Users tell of it taking days for the card to stop working during which the user works blissfully unaware of the impending doom.
Once affected by the malfunction the built in status LCD shows the same “SD err” error message that is visible when you try to use an unformatted or way too slow memory card that could not keep up with the data flow of the camera (for example if you put in a noname MicroSD card from your mobile phone). Only in this case your 64GB card will stop working completely. Apparently though, SanDisk cards get replaced under warranty even if they malfunctioned due to this problem.

This is how a lion plays with a GoPro camera