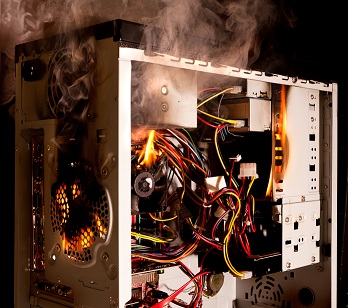 The server running my blog appeared to have had some sort of malfunction in recent days. Thankfully the technical error (the failure of a RAID controller) was overcome. Unfortunately at the moment the server is running a bit slower than usual – but at least it’s working and is still faster than the defunct controller was allowing to be. Credit and thanks are due to the specialists who were able to solve the problem quickly even without the right parts at hand.

Unfortunately the Easter bunny isn’t bringing any new parts to replace the faulty one. The current half speed will remain throught Easter with a replacement for the broken part arriving only after the holiday.

Addition: It seems this photo I posted on Facebook scared some of you, but it looks worse than it actually is. The server didn’t burn and there were no plumes of smoke due to the malfunction, the pic is just a stock photo for illustration purposes.

Happy Easter to everyone!