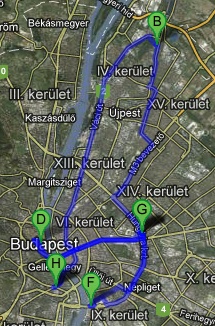 Quite a busy Friday for me. Aside from the Ice Hockey World Championships, I had some other jobs on so ended up doing a lot of dashing around the city.

I have to photograph three matches daily at the Ice Hockey World Championships in Budapest which are on at the moment. Before going to shoot the first game on Friday, I had a job on elsewhere in the city, another after the game, then back to shoot more hockey and so on. In all I was at six locations though the day including the back and forth three times to the Sports Arena where the hockey was held.
Surprisingly all this running around was less tiring than sitting all day in the Arena during the first days of this tournament shooting hockey all day. But shooting only one thing without all this rush is more relaxed.

This time I didn’t have a GPS in my pocket recording my route like last time so I had to use Google Maps to calculate where I had been during the day. According to Google Maps the distance travelled on Friday was about 62 kilometers. On the other hand the route planner says this distance takes only one hour, whereas I made it in a full day from morning to evening – of course doing some photography at each location.

Of course the travel part could have been faster and I could have spent more time on the photography if I’d used a car instead of public transport. But I was able to manage it and that’s what counts.

The weather wasn’t on my side either
Apart from distant locations the weather also made things difficult. After a long drawn-out winter we have had quite a warm spring, and temperatures that day were around 25 degrees celsius. Indoors in the Sports Arena there is a large ice surface for the hockey with suitably cool ambient temperatures. After the dashing about in the warm city  arriving sweat-soaked to the ice meant I had to put on warm clothes not to get cold.

All this of course is nothing compared to what photographers working at dailies travel every single working day. Thankfully I haven’t worked at dailies for some years now. However the mad rushing about convinced me to try to shoot the large bicycle event Critical Mass in between two hockey matches this weekend. Of course it won’t be deep photo reportage, just some news images at the end of the event. And I probably won’t be able to take anything similar to the one I took of a woman photographing while riding a bike last time.

I got a doublespread photo in Stern Magazine