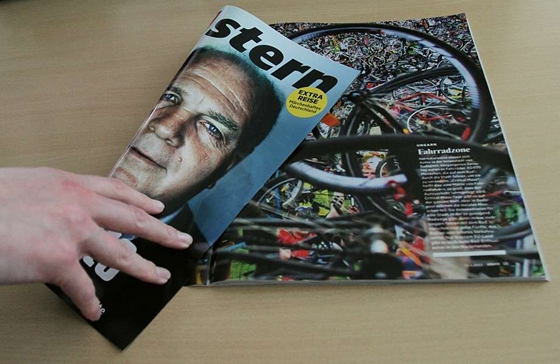 Last week’s edition of the German Stern Magazine published a photo of mine taken at the last Critical Mass bicycle event over a double page spread. Maybe not an earth-shattering deal but for me it feels great good to see it in large print!

Last Friday I got a call from a friend and colleague Mate Fulop who works as a photo editor at the Hungarian weekly news magazine HVG saying: “Hey, Attila, do you know you have a doublespread photo published in Stern Magazine (who were writing this article including the photo)?”
I found it in the online edition too, and of course rushed to check it out in the print version where even if I say so myself, it looks great. It was definitely worth dashing across the city to the city park during a break of the Ice Hockey Division I A World Championships where I was working to capture the bike-lifting moment. I also began to regret not being able to spend more time at this year’s Critical Mass – especially as this year’s was the last one to be held for the foreseeable future. 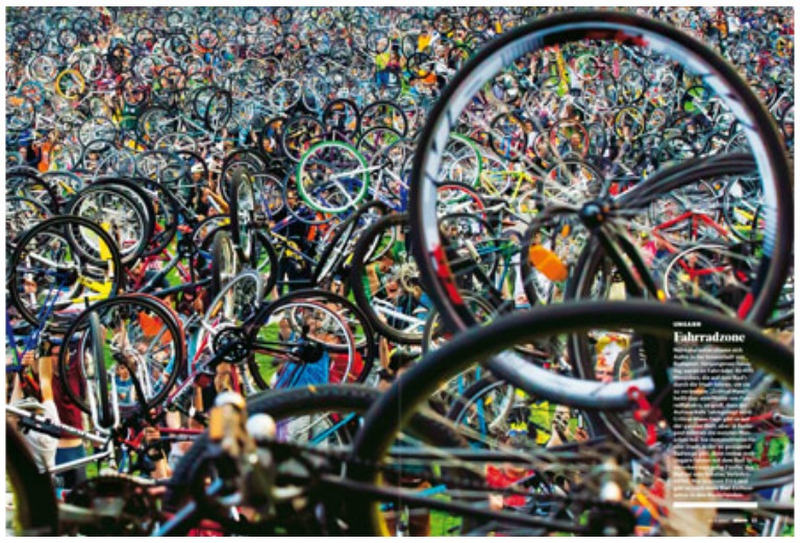 When I told this story many of my friends asked “How did they got the image? Did they steal it?” Someone even told me I absolutely must start a lawsuit after all I’ve written about copyright of photographers being routinely infringed.
But they didn’t steal it, the magazine got it totally legally. The funny thing though is that it passed through at least three of the photo agencies before it made it into the magazine, but this is part of the bizarre mechanics of the news world. Material for another post.

Some of my friends didn’t know who Stern are, so let’s have a look. Wikipedia says Stern is the oldest news weekly in Germany, and publishes nearly one million copies, typically including high quality images.

The first pages of the magazine show a selection of Photos of the Week where selected images appear on double pages. Well, what can I say? I’m happy to have my photo there. By the way the Hungarian InPhoto blog already categorised my photo to be iconic. I’m not sure it’s that unique. I’m pretty sure most photographers have taken at least one shot like this (and we usually made practically the same photo every year). But this is THE news photo that compresses all the story into a strong image.

Earth Hour around the world

No twiddling of thumbs on Friday

Jimmy won me picture of the day