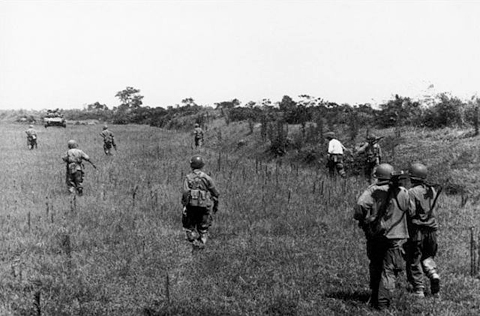 In Thai Binh in Indochina, the world famous war photographer  Robert Capa, born in Budapest as Endre Erno Friedmann, died on this day in 1954. Here is his last photo taken before he stepped on a mine and died.

Unfortunately there is not much around about the backstory of the photo which I borrowed from InPhoto Blog. The photo, labeled BOB1954007W00006/ICP891 in the archive of the Magnum agency Capa co-founded, has only one sentence next to it: “One of Capa’s last pictures”.

On the agency website his biography says this about his death: “On 25 May 1954 he was photographing for Life in Thai-Binh, Indochina, when he stepped on a landmine and was killed. The French army awarded him the Croix de Guerre with Palm posthumously. The Robert Capa Gold Medal Award was established in 1955 to reward exceptional professional merit.”
Time has a more detailed article on him as well as an interesting quote: “This is going to be a beautiful story,” he said as he set out from the village of Nam Dinh, in Vietnam’s Red River delta, on May 25, the last morning of his life. “I will be on my good behavior today. I will not insult my colleagues, and I will not once mention the excellence of my work.” Eight hours — and 30 km — later, Capa was dead, killed by a landmine at Thai Binh, as he tried to get just that little bit closer.
Hungarian Wikipedia says “he went on patrol by foot with a company of French soldiers on the Laos border. On the road he photographed the soldiers, burned and looted villages and unburied corpses. Five minutes before three o’clock in the afternoon (despite being strictly warned by the unit leader) he climbed on a small hill to photograph the view when he stepped on a land mine that killed him immediately.”
The English version of Wikipedia writes he was still alive when his body was found after the explosion but his left leg had been blown to pieces, and he had a serious wound in his chest. Capa was taken to a small field hospital, where he was pronounced dead on arrival.