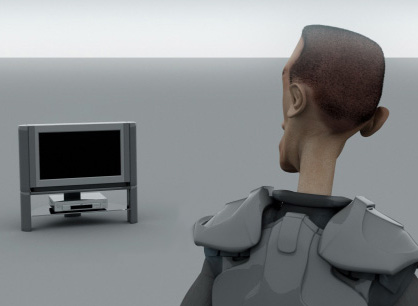 In the recent days I accidentally found an old time favourite of mine. I didn’t mention it on the blog yet, but I felt it important to share it in a post.

Fifty Percent Grey is an animation short movie what I was found of for the very first sight. However it took years or even a decade to find out, it is not “just a small” amination – or even if it is, then it has much more to it.

The Irish creator Ruairi Robinson himself says it was is first professional animation. In the sense what he had a budget for, not made just for his personal enjoyment. Othe than the sound effects he made it himself. Making it cost him 10 thousand euros and six months, because he only worked on it during his free time.

The movie however not only touched me, but many others too. It was shown at more than seventy film festivals. Including such well known festivals as the Sundance and in 2002 it was nominnated for the Oscars too. It was awarded in short movie categories of the London Effects and Animation Festival (LEAF), the Empire State Film Festival, Dresden FilmFest and many other festivals.

Despite the movie being well worth talking about it, the creator does not like to discuss it much. He even expresses it in a much dirtyer way on his website, how much he doesn’t like to talk about his movies. And he is right.

Watch it, it speaks for itself! (Scenes may be disturbing, not child orr work friendly!)

Once Ireland is mentioned, I also suggest watching the other short movie Yu Ming is ainm dom (click the link)!