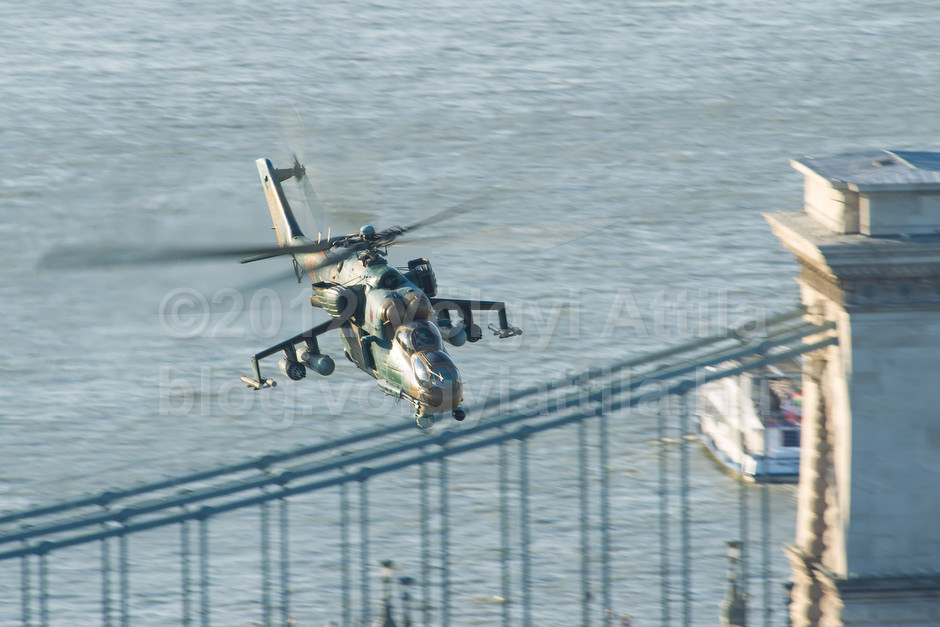 The public shooting of the Die Hard 5  movie scenes with Hungarian Army’s Mi-24 helicopter was quite instructive. It brought to the surface how people photograph helicopters. I got into delays with this post as I had no time to publish it, but the current air show at Kecskemet is a great opportunity to dig it up and publish it and hopefully, it can help to some people.

My reaction to pictures published here and there was roughly the same as the common ground became in the debate over at the Hungarian photo-sharing community IndaFoto. Now the air show is at arm’s reach I really feel it is time to publish this. 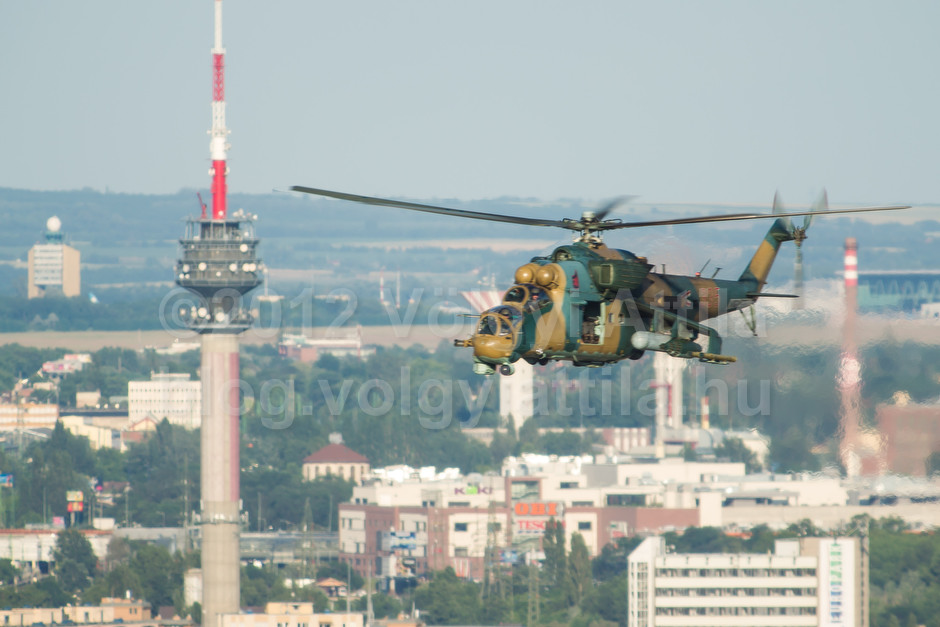 We usually take pictures of helicopters with spinning rotors (FYI: the rotor is the rotating wing whose movement keeps the aircraft in the air). If the rotor isn’t moving the helicopter falls down. This means on the photos it is  advised having a motion blur to add the feeling of movement to the picture. Otherwise, it would suggest the aircraft is just stopped in the air levitating.
Even cars and bicycles don’t look good with stopped wheels as it suggests the car is stopped on the road. But in the case of helicopters (or the traditional propeller airplanes), this stopped feeling is even more unnatural as a stopped helicopter would fall from the sky. When photographing helicopters it is advised to show the movement in the photo instead of freezing the moment.
All the comments got the editor of the mentioned blog to publish a complete article about the topic with the title Hardships of photographing helicopters. I wouldn’t rather repeat everything written there. However, you cannot read the original post unless you understand Hungarian. 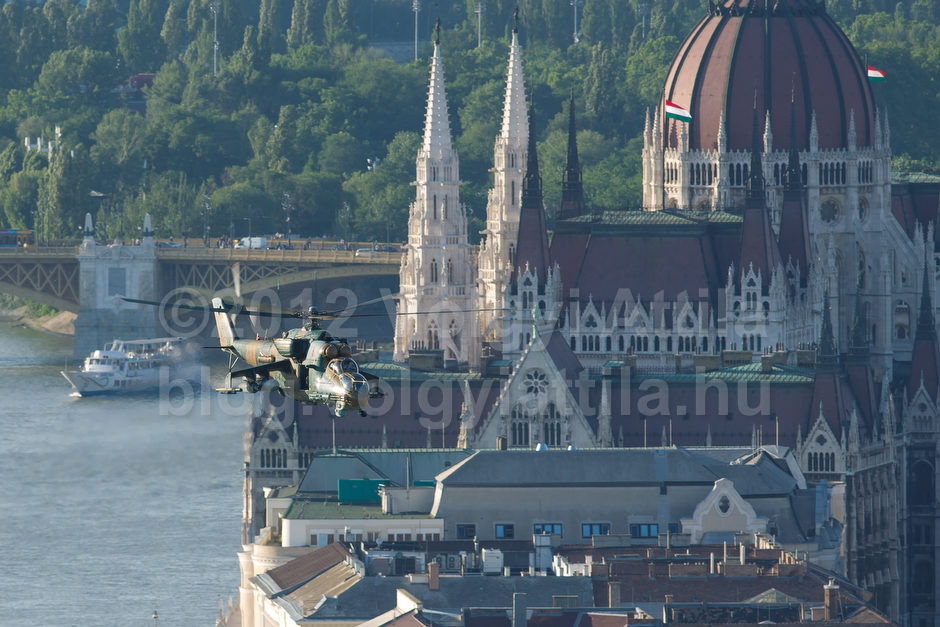 I’m honored to be asked by both the author and some commenters to see my pictures related to this topic. You can see some of them here and in my archive as well. Unfortunately, I had no time to publish them earlier.  To the mentioned blog post I have only the addition of a physical rule. We usually try to photograph with all our lenses with a shutter speed of 1/focal length of the lens or shorter to avoid blurriness coming from the shake of the lens. This means to use a shutter speed of 1/400 or faster with a 400 mm lens.

Using this technical rule helps you to avoid the unwanted motion blur. It is especially true while using large focal length lenses which make it much easier to shake them during the shoot. When photographing helicopters (or cars, bikes, etc.) you have to keep it in mind to work counter the general rule and do the exact opposite. This way can you show the movement. It is, however, a risk to have not only the wanted part, the rotor to be blurry from the movement, but possibly everything else you would want to be sharp as well. This means you have to make more attempts with the shooting and try to hold the camera as steady as you can.

My opinion is summarised by the writing of Emil Dudas (translated by me from Hungarian): 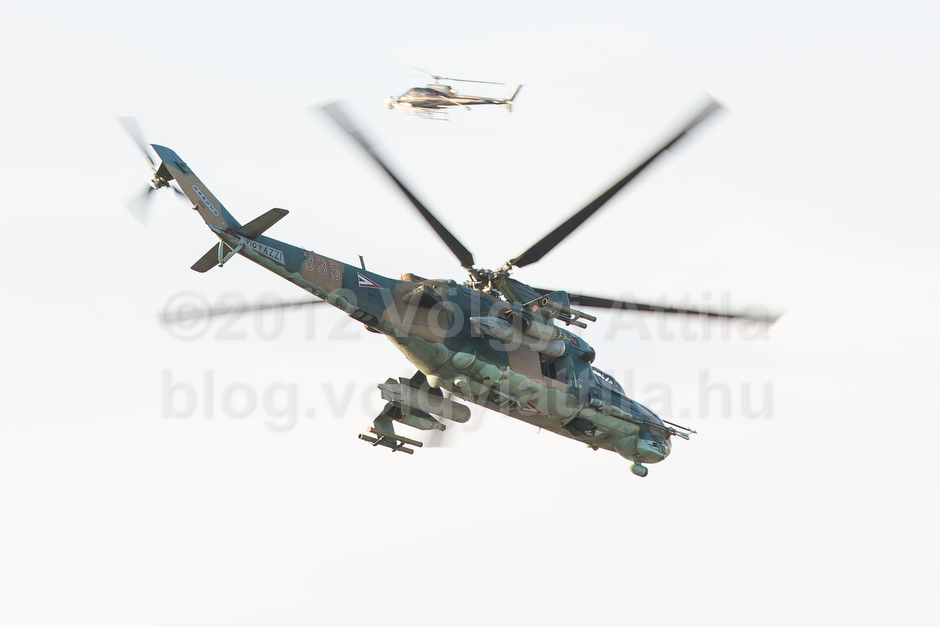 “When photographing helies I too like to take photos with the ends of the rotors blurred, but at least _for me_ there is a very small percentage of really sharp images this way (I work with 4/300 and often use a teleconverter too. it is often hard to pan the plane well).  This is why I usually take some pictures with shorter shutter speed with frozen rotors, but at least the rest of the picture is sharp as well. Then I have the possibility later to play with the longer shutter speeds to have rotors blurred. Some times it does work 🙂 […] It is not magic. It only needs some practice and endurance (maybe a little luck too) in addition to a relatively useable gear.“ 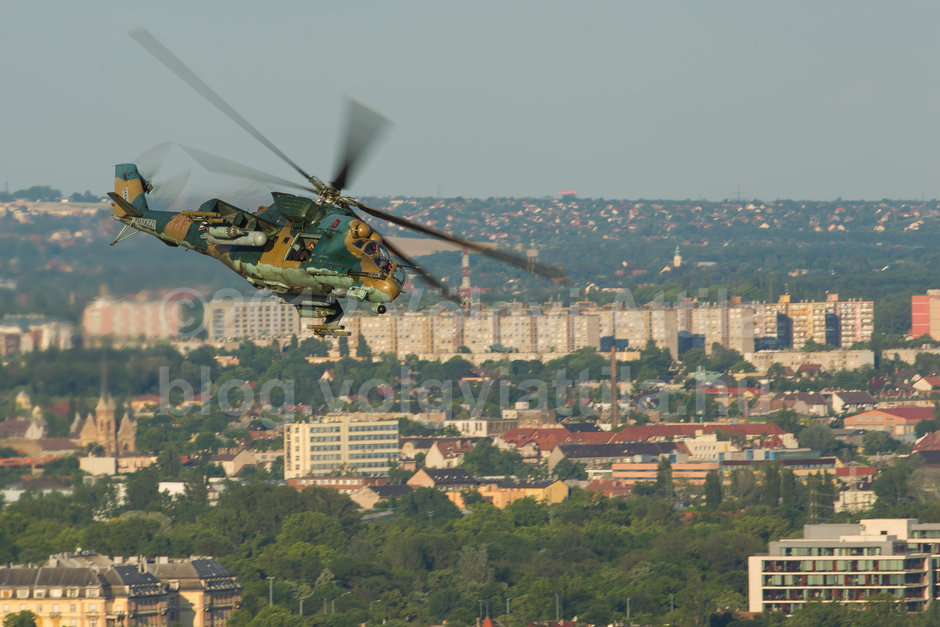 In his writing, Nandor Hargita has a look at (a small portion of) the pictures that appeared in Hungarian media about this flight of the Mi-24. In fact, he only concentrates on two instances of publication.

Hungarian news site HVG shared the pictures of their photo editor  Levente Hernadi taking pictures in his free time only on their recently started (and not so long after also discontinued) Tumblr site Tumblr Nagyítas. Other news site Index’s article used photos taken by Bea Kallos for MTI the Hungarian news agency in addition to the photos submitted by readers. They also had another article that also used handout photos of the Hungarian Ministry of Defence. Another news site Velvet shared a shaky video submitted by a reader. Meanwhile, on the main page of Index, there was a great photo gallery shared taken by the enthusiast photographers of IndaFoto photo-sharing site owned by the news site’s owners. 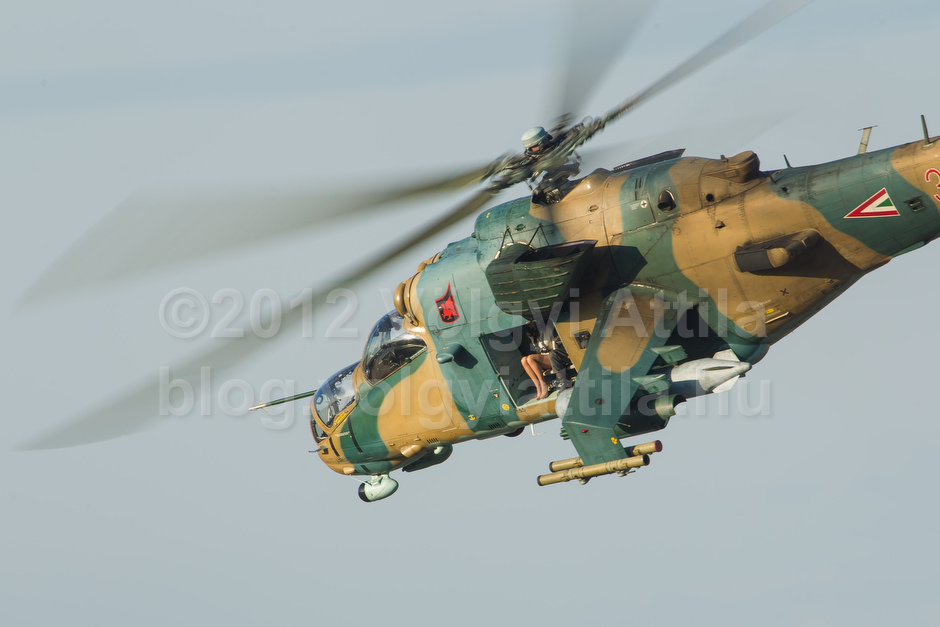 Viktor Veres is known in Hungary for his plane photography enthusiasm and also award-winning pictures. From this flight his pictures appeared on the website of Blikk tabloid newspaper. Their main competitor Bors had a gallery made from the photos of their photographer Balint Fejer and the already mentioned handout photos from the ministry.

Unfortunately, the Zrinyi Media website didn’t allow me to link their gallery to show the photos they shared. Other than the possibility to link the gallery the name of the photographer is also missing so I only know for sure at least a part of them was taken by Vera Devenyi (who stood next to me at Citadel while we took the pictures) and who has a long and professional history of photographing the rotor winged fighters. I also saw some other colleagues there, but I didn’t find their photos online.

Update: A few years after my original post the video below became popular on YouTube and it quickly spread all around. Like many other photographers, I too was reminded by it about this writing. I this case the phenomenon is explained by the shutter speed of the camera (yes, video cameras also have a shutter speed) exactly matching the rotation speed of the rotor. This makes the rotor to seem like it was completely stopped in the video.

Update2: During the time passed since the shooting the movie didn’t only have a premiere, but we already forgot it despite it took so much of our time while it was shot in Budapest. However since some scenes can be found online from it, now I can show you how the end result looks like in the movie.

Tips and tricks for photographing airplanes