Photo editors at Hungarian news website Origo found a photo that seems to be retouched before publication on the website of one of the radio channels operated by BBC. A portrait of one of the musicians has been cropped out from a group shot and some details in the background have been cloned out. BBC claims it is not a faking of the photo because the photo is not used as a news image.

This week some argute photo editors of Origo  found a photo that leave some interesting questions. They published their findings on their 35 mm blog (in Hungarian): on the website of BBC Radio4 an altered photo of cellist Anita Lasker-Wallfisch can be seen.

“Any digital manipulation, including the use of CGI or other production techniques (such as Photoshop) to create or enhance scenes or characters, should not distort the meaning of events, alter the impact of genuine material or otherwise seriously mislead our audiences. Care should be taken to ensure that images of a real event reflect the event accurately.”

Regarding these regulations it is appropriate to ask (however it is unclear if Origo did indeed ask BBC) what might have happened here.
Any way this is an entirely different story from the photo retouching that led to fireing a photographer at AP and other similar stories before. Or even those photo edits that some times happen in newspapers. Those cases had pictures modified that recorded some events with a news value, compromising their credibility.
In this case however the picture is originally staged and it has been used out of context of its creation. The radio used it to promote a radio show featuring the artist on the photo thus the image could’ve been any other photo of the woman – just there is not really any other in reach just this one. I’m not surprised by the answer BBC gave to my question:

“As we are not using the image to illustrate a news piece – and hence it is not used to convey any specific event – our agreement with Getty allows us to manipulate such non-news related images to suit the purpose. […] Please let me assure you that we take our responsibility to all contributors – be they guests, journalists or photographers – very seriously.“ 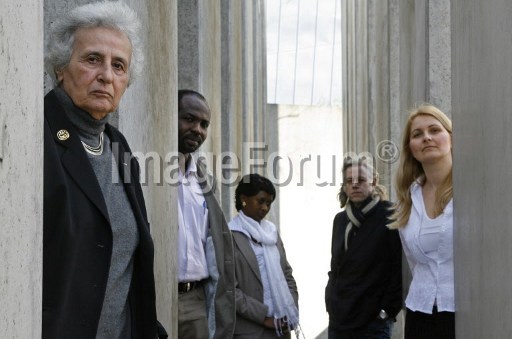 (L-R) Holocaust survivor Anita Lasker-Wallfisch, survivor of the crisis in Darfur Ishag Mekki, survivor of the war in Rwanda Philomene Uwamaliya, Irish musician and political activist Bob Geldof and survivor of the war in Bosnia Sakiba Gurda pose between the concrete steles of Berlin’s Holocaust memorial 25 March 2007, after giving a press conference themed “50 Years On: What Are We Celebrating?”. The German capital hosts celebrations to mark the 50th anniversary of the signing of the Treaty of Rome establishing the European Economic Community, the precursor to the EU, on March 25, 1957.
Photo by Clemens Bilan/DPP/AFP/Getty Images

Photographer/agency mistake
The edit itself hasn’t been made by the agency or the photographer so they aren’t to be blamed for altering the image. However I think they did make a mistake not supplying the photos that would meet a demand on the market. The source of this whole situation has been that neither Origo, nor BBC before them did find a solo photo of the woman. This is why BBC had to create it and this is why Origo found the doctored image.

A quite obvious solution to the problem could’ve been at the time of the creation of the photo if the german photographer Clemens Bilan could take individual shots as well of the persons seen in the group image. Those images could be used individually in cases like this instead of altering the original photo. I can imagine that at the moment nobody thought of the need of individual pictures. Connected to the event at hand perhaps only the group shots were required because only that one connected the event. But just like this story shows there is not really any other individual photo of them in the agency archive. Demand from publishers however there would be for such images if they would exist. The interest of both the photographer and the agency would dictate to have all the photos their contractors could need to be sold to them.
Out of my own experiences I can even imagine that the photographer did take such individual photos as well just the agency rejected them because at the time they didn’t consider them important enough.
Unfortunately agencies often try to cut on the number of photos published. Especially when they need to pay for photographers for the images they accept for publication and not in a package only after they are sold for publications. It happens far more often than it can be called ideal that the photographer takes the photos that would fit the story and the demand but the agency decides they don’t need them all. (It just happened with me during the last days – not for the first time and not for the last time either.)

Another possible situation
I already know from the answer of BBC that it was not the situation at hand, but it quite often happens and could’ve been the case this time too. Often the artist him/herself sends some photos to the publications saying the pictures can be used for his/her promotion – without the otherwise mandatory credit of course. These photos even could be altered by the artist or some aid in the background. In this case the publication would use the photos with a good faith not even knowing the photos were edited or if the artist does or doesn’t have authorisation from the creator of the photo.

Situations like this happen almost every day and quite often they cause uncomfortable disputes among the involved parties. Publications suppose handout photos can be used, while artists mostly don’t care about copyrights. Often they don’t even know it exists. Many of them thinks if they are on a picture than they can use the photo for whatever they want – what is clearly not true without a contract that would confirm this.
I cannot even tell how many photographers contact me with similar stories to get my help. Naive photographers some times send the photos in good faith to the subjects for their personal use. Just the subject doesn’t even consider if he/she may or may not use it for publication. Next time the photographer sees his/her image it is published on a website, Facebook or even articles, book covers or on billboards. Subjects don’t even consider it a mean thing to do. They just don’t know copyright law – and they don’t even care about it. Then they start telling various baseless excuses we all know for long.
But for last I repeat: in this case this wasn’t the situation it was just a good time to mention this problem too.

What do you think about the situation and BBC’s answer?

Photo-cyclechic: girl with a camera on a bike at Critical Mass