The popular photo sharing website has been selling photos before as well, but they now plan to launch a photo agency service. Their slogan is “Accessing Talent” and they claim being the largest photography community of the world. Many of their users however think they joined those who devalue talent and they only want to rip off photographers contributing to the site.

New approach
The recently redesigned 500px site made a new business offer to photographers. The photo sharing site has been selling photos offered for it by their creators, but they now announced to start operating as an agency as well. Other than simply personal decoration now they will start to sell photos for use in press and commercial purposes. They will expand their team with sales people who will find buyers. They will work on finding new business opportunities to sell the photos offered for sale by the photographers to get more income to the creators and to the agency as well.
In the announcement they mention the trend of devaluating photography. They want to reassure everyone they don’t “join the race to the bottom” because their licence fees will start at $250. This pricing shows they really don’t want to compete with microstock sites. However many photographers feel offended by their intention to keep the bigger part of the income and want to pay only a small portion to the creators of the images.

The payment after sale business model is the foundation of stock photography and often the agency models in general as well. It has been around photography for a long time, but percentage paid by the agencies become greatly different recently. This new agency probably doesn’t even have any circle of buyers, but they want to keep 70% of the income from all photo sales and plan to pay the image creators only 30%. Phoblographer optimistically explains this to have a $1000 (about 730EUR) photo sale that pays the not so bad $300 (about 220EU) for the photographer. Even in this example it is quite visible how reversed this ratio is.
Phoblographer however adds photographers maybe do better if they promote their work on their own as well, but in case they find the buyer to sell their product why would they choose to keep only a small portion of the price instead of the bigger part or even keeping it all. Not to mention for self hosted photo sales there are a plenty of online services like PhotoShelter what I use myself (if you register to PhotoShelter on this link, both you and I get a discount from the fees). 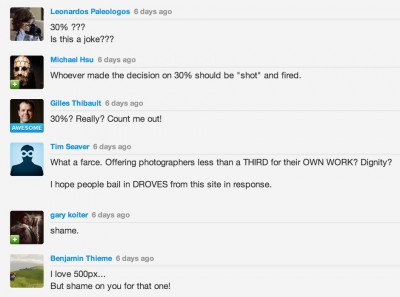 Serious outcry
There is a few user who welcomes the 500px announcement. Many others however are critics of it. Some think the site did “join the race to the bottom” while other commenter says these agencies are all “bottom feeders but [there] are tried and tested bottom feeders” among them what 500px is not.
Exploiting photographers became a trend among agencies. Better agencies usually don’t keep more than 50% of the sale price what would mean the middleman gets more of the sale than the creator of the content. Unfortunately more and more agencies push their percentage into the direction less profitable for the photographers.
Even the previous sales model of the 500px offers 70% for the photographers and keeps only 30% for the site. But it seems they want to grab more from the business – on the expense of the photographers. By the way Apple has been widely criticised for the introduction of their App Store business model that only keeps 30% after each sold application.

Splitting costs
After sale payment in every field is all about minimising the risk for the agent. Contrary to the traditional commerce the salesman doesn’t buy the product from the creator, but they split the income after the product is sold to the buyer. The agency doesn’t invest into the product just to get the sale. The photographer however needs to create and deliver the images. And then he can start hoping to have a good enough agent to sell the product. Upon delivery (upload) the photographer doesn’t know how much money he will get for his work. More than that he doesn’t even know if he will get any money for his work at all – but the work must be done just to find out if it was worth or not. Both parties risk something in hopes for the success, but the level of risk taken is getting unbalanced just like the level of payment – and the percentage change is in no relation with the risk taken.
The agency needs to store the photos, manage financial transactions, find selling possibilities, build a circle of buyers and promote the uploaded images to them and get more sales. These are big investments requiring to host servers, websites and pay a staff. But they can involve into this business hundreds of thousands or even millions of photographers and chances of sales are multiplied by the numbers of photos they all make. IT prices drop constantly decreasing costs per image drastically.
Costs of creating the photos however are all on the shoulders of the photographer. Photos on 500px are not mostly news images so wars, protests and catastrophes are less regular among them, but creating them still takes a lot of time, energy and equipment. Unlike the agent the photographer cannot exponentially increase the number of photos he can make money out of. Theoretically of course a photographer can sell the same photo to multiple buyers even using multiple agencies (if his contract doesn’t require exclusive selling rights). However the very same photo not necessarily will sell if it can be bought via more agencies and this tactic may even work against the photographer making competition to his own image on a different agency site. Anyway the higher agency percentage makes it harder for the investments to pay off even if there are unusually high volume of sales – what seems less likely with 500px at the moment.

Signs indicate 500px (like more and more other agencies too) try to make a good outlet for professional photographers. It sees more likely they try to get devoted amateurs into their system who lack business routine and considerations to exploit their naiveness. They may consider any money a to be a good payment for their images already taken and available. This is what lots of companies and “friends” usually want to exploit when they ask for free work from photographers (or any one else of course). The difference in this case is the agency who sells the pictures for a decent price just they want to make the good income not the photographer. 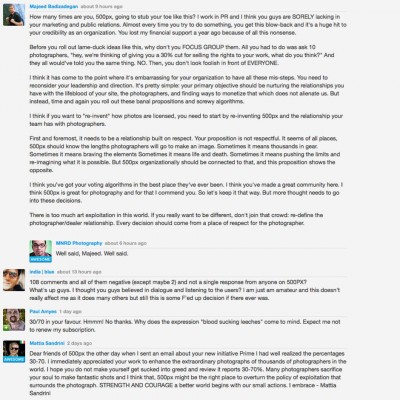 Flickr has a similar agreement with Getty Images that is in operation for years now. It lets Getty choose from photos uploaded to the uploaded photos and if they like a photo, after the photographer agreed the agency may sell it. As I know Getty doesn’t pay much better for these photos. This is part of the aggressive expansion strategy why Getty is considered to be responsible for the downfall of the photo industry.

Good faith
I believe in the presumption of innocence. 500px may have just mistaken the numbers. I can imagine they wanted to pay 70% to photographers and want to keep only 30%. Perhaps they just swapped them by accident. But their announcement probably has been checked a few times before publication so I would be surprised by such an accident.
Under their announcement there are a growing number of comments now more than a hundred most of them criticising (with a very small minority of support) this percentage. But the company didn’t give even a line of answer to the outcry what seems not to confirm the theory of an unintended mistake.

What do you think about the business model of 500px and the low percentage for the photographers?

Image credit: The illustration above is a montage created using a screenshot from the 500px page and the image of coins shared by wwarby on Flickr.

What often even photographers tend to forget