Interesting social experiment using the tools of photography and model retouching. Everyday women have been transformed into cover girls who in the end turned out not to like the result better. They actually prefer accepting their original look instead of the altered but fake one portrayed by the retouched photos. We just don’t know if they are really honest in this video.

BuzzFeed organised a studio photography session for four women who only dreamt about becoming a model for the covers. As it usually happens they were provided professional makeup, hairdressing and photography than their images got retouched. All the small blemishes and freckles were removed, all skin and shape details got corrected. Then they showed the resulting images to the happened to become models.
All of them were surprised by the outcome but they didn’t like them on the retouched images. All of them says in the video they don’t look like their retouched image, these pictures aren’t natural They even ask if all details are changed, corrected and enhanced then where are they themselves left in the image? The video tries to suggest (maybe too hard) that after reviewing their images all of the women can better accept their real look than before did.

The big question is how honest this video is. Are these women chosen randomly from the street or they just acted reading a script written by the director to deliver the message the creators wanted to share?
I think staging all this video would not be too unusual from BuzzFeed. They usually serve on viral content and light amusement just like their other video Things Superheroes Do That’d Be Creepy If You Did Them.

Fstoppers shortly and factually presents the video but their commenters seem to criticise the original nature and the message of the video.
The article of PetaPixel doesn’t question the intentions behind the video, but they add this video is a good example to the common wisdom “some times less is more”. They point out it is not worth over retouching a photo and add all the portraitists they talked to think the photographer has to use mainly the lights and posing techniques not the retouching. 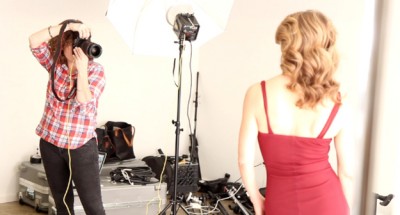 Their commenters are more photography oriented in their critiques. They don’t like the images before retouch. Many of them think even the photography and lighting was poorly done not just the retouching is way overdone and being so even poorly. No surprise this result is disliked by the subjects.
Some commenters point out the fact women use make up, hair hair dye and plastic surgery for ages to look better so it seems unlikely that simply looking different than original is a valid reason making only PhotoShop out of accepted tools – all this of course varies from person to person. Many photographers tell their customers always prefer the retouched images better than the unaltered original – of course most of them adds they do a much better job than it is seen on the video resulting a more natural outcome.

What do you think about the photos in the video and the whole concept of it?

Not all photo edits are unethical