Photographer prepares to shoot an ice hockey game during the Winter Olympics in Sochi.
Photo by Bruce Bennett/Getty Images

Sports photography is mass production anyway, but especially at the Olympics that is the greatest of all photo mass productions. The events host the most and best sportsmen around the globe and the whole world is interested in their competitions so media covers every moment almost instantly. Learn how work looks behind the behind the scenes!

We are in the third week of the winter games in Sochi. During this time everyone met hundreds of pictures even if one is not following the games. Formerly I wrote about the adventures of Jeff Cable that present what challenges photographers face at the Winter Olympics.

One of the most important part taks of photographers (directly after taking the photos) is submitting pictures. PetaPixel wrote about how tight deadlines a lonely working photographer has to meet. While the contract of Jeff Cable required him to send pictures within 12 hours, two years ago at the London Olympics he only had 2 hours for this. Now he mentions having only the 14 minutes between hockey games because he has to send the pictures in this short break otherwise he would risk missing some peak action.
There are however some other photographers who have even faster pace for sending images. Photojournalists of the main news and photo agencies don’t even spend the time to eject the memory cards from their cameras or to edit their pictures. They work in a much more efficient and faster way.

The Gizmodo article only mentions the two US agencies AP and Getty Images but the workflows and speeds too are quite similar for the other big agencies based in Europe like the french AFP and the british Reuters. The later one published a similar article about the work of their picture editors at the London Olympics, what I also mentioned and Translated for my Hungarian blog. To see the full article about the big US agencies read it on Gizmodo, here I only use a few quotes and some of my personal comments. (These stories about the agencies always seem to be shameless self promotion, but I can understand that representatives of these companies are proud of their work.) 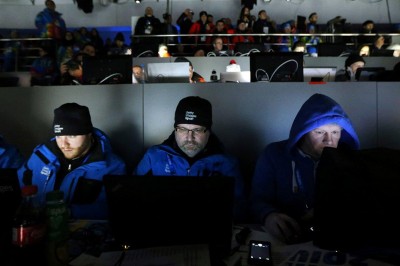 The Getty Images team gets ready to go for the Olympics opening ceremony at Fisht Olympic stadium.
Photo by Michael Heiman/Getty Images

Extreme numbers
People watch the Olympics on television and they want to see images as soon as possible – especially editors at newspapers who wan to publish news on their sites. Just like they say in the article “It’s all about speed”.
The two photo directors share interesting details about both past and present of photographing Olympics. Back in the analogue days “Film had to be run back to darkrooms, where editors would wait 2-3 hours for photos to be developed—and that’s for expedited, prime-time events. For less interesting competitions, it could take 12 hours for rolls to make it though the chemical baths. On a busy day for Getty before digital, the agency was able to move between 100 and 150 photos a day.” – saysKen Mainardis, VP of sports imagery at Getty Images, who covers his 10th Olympics this time from Sochi.

These days the numbers are much higher the AP says they are filing some 2000 Sochi photos every day to the wire. Getty Images and Reuters may have similar numbers and agency representatives say:

“each agency’s photographers will shoot a combined 1 million frames over the course of the games. […] Divide 1 million photos by a 36 exposure roll of film.” By analog standards, today’s Olympic photo agencies are plowing through nearly 28,000 rolls apiece. The powerhouse professional cameras photographers use these days, like the Canon EOS 1DX, are capable of shooting up to 14 frames per second. That’s a finished roll of film in under three seconds.” 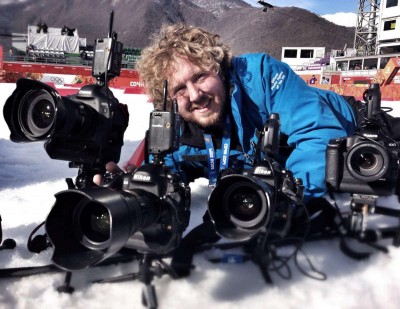 Getty Images’ Lars Baron is a specialist in Ski Jumping and Biathlon. Here we see his rig with two Canon and Nikon bodies. The action happens too fast for photographers to switch lenses so every necessary focal length is ready to go with its own body.
Photo by Getty Images

Photographer’s gear
The article also tells what each photographer is equipped usually (of course some may choose different gear for some assignments):

“The standard kit for a Getty photographer includes four camera bodies each outfitted with different lenses: 16-35mm f/2.8, 24-70mm f/2.8, 70-200mm f/2.8mm lens, f/300mm F2.8 lens. As you can see in the image below, Getty photogs travel with a mixture of Canon and Nikon cameras bodies, while the AP is an entirely Canon shop. Without fail, these photographers are using either Canon 1Ds [I guess they meant the 1DX because 1Ds is an outdated model – comment by the blogger VA] or Nikon D4s. Unlike most disciplines where you could get away with something other than flagship DSLRs, sports photography requires the 10-15 fps speed that you get at the top of the line.”

As I know AFP has only Nikon cameras and Reuters only uses Canon. Other aspects of the basic gear description apply for most of the big agencies.

Just like the Jeff Cable’s blog post the Gizmodo article mentions the heavy work of photographers too and all the technology and arrangements the wire agencies involve in the winter games. They also include a detailed description on the work of editors and what are the main differences in the photographic approaches of a news agency and a photo agency. 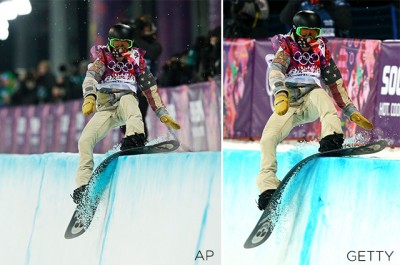 Shaun White of the United States crashes out in the Snowboard Men’s Halfpipe Finals on day four of the Winter Olympics on February 11, 2014 in Sochi
Left photo by Andy Wong/AP
Right photo by Cameron Spencer/Getty Images

Room for creativity
I really liked what they share about the comparison image to the right:

“There are thousands of moments like Shaun White’s collision in every Olympics. Each lasts a fraction of a second, so there’s almost no time for the photographers to take their eyes off the action at hand. Still, both Paquin and Mainardis say that they’re constantly hoping to get that shot that says what all of the canned photos can’t. […] It’s a technical shot, but there’s nothing special about it.” – says Paquin. “You always get the jump, you always get the react,” says Paquin. Later he added, “I’m always asking them to look for something a little different… A little detail shot. Anything to help covey the drama of the games.”

Read the whole article on Gizmodo for the rest of the interesting stuff!