An interesting and funny project by one of Hungary’s news websites called Vs.hu. This fake docu-reality presents different aspects of every day life in Hungary in the style of the nature documentaries but in a manner to make fun of the situation.

Introduction of the series says, the nature videos of Jivens O. Breewenses analyse subcultures in the urban areas. The show can be seen biweekly on Tuesdays at 12 o’clock on Vs.hu and their YouTube channel. 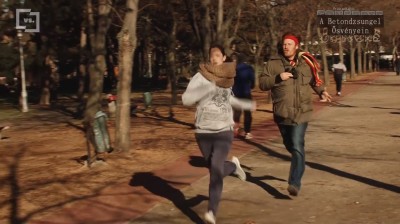 Not everyone likes being analysed on camera

The few minutes long episodes have no other motive just to entertain viewers. You can’t even by accident call it an infotainment production. Unlike Spektrum, Discovery, National Geographic, or the like being made fun of they don’t have any intention to deliver new information. Rather they build strictly on situation comedy that is mostly coming out of the fundamental approach of the host who plays the outsider scientist discovering the habits of the subjects.

We get no new info about skaters or reporters. Maybe we get a bit baffled by the situation like the running girl afraid of being harrassed, but hopefully she won’t sue the makers for either for harrassment or for breach of her civil right by recording her without permission. Maybe fun made of the Hungarian celebrities holds some fun for those who know them – once they get no other purpose.
I cannot really decide if I find it amusing but I’m quite surprised this site started a series like this just a few month after their start even involving celebrities. After all their chief editor Gyorgy Kerenyi told in an interview about their plans “No tabloid content”. Well it seems this decision didn’t last for long. Of course this statement was a bit broad because it doesn’t make it obvious what they consider to be tabloid content and what are the limits – it seems they consider this to be something else.

What do you thing about this genre and the short videos published so far?

More from my site

More from my site