Washington Post wrote yesterday that the Obama administration often criticised for not allowing photographers to work just allowed some time for the White House pool to take photos of the president.

This wouldn’t be newsworthy if these photo opportunities would not be very rare and if it would be any more than ten seconds allowed to stand in front of a small window of the Oval office.

The White House brought the press pool out for a brief glimpse of Obama. From a distance. Through a window. pic.twitter.com/49jVdO5bRJ

You see above how photographers and TV cameramen had to work during this time and you see below what a resulting picture looks like. 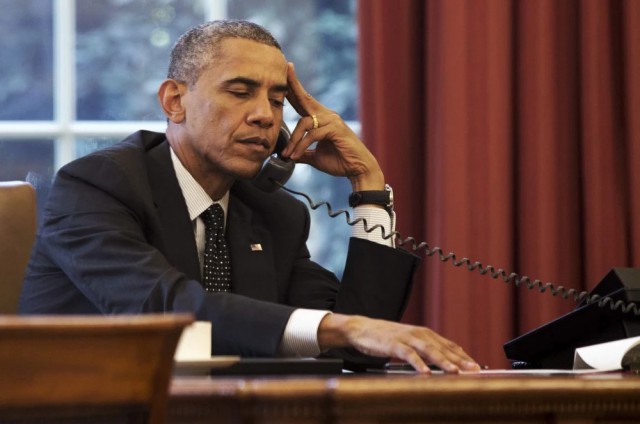 They could take such photos
Photo by Jacquelyn Martin/AP

Of course the official photographer of the president Pete Souza, I often write about n this blog has no such problem. He and his team of photographers have free access to all parts of the White House to provide photos for the presidential cabinet to choose the ones that best suit their goals. This is why US media complains for a while to get more access to cover the work of the president. 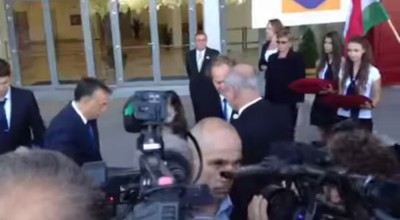 Illustration of sutch a scene

Meanwhile in Hungary
Such short photo opportunities are usually listed in press invitation emails as “possibility for photos and cutscenes”. The term used in the US is “photo spray” what describes the event much better. Photographers really don’t have any other chance just to shoot a burst of images at the highest fps of their camera and hope to have any shots that can be used not being burned by the flash of some of the other twenty photographers, none of the still or video camera guys bodguards or diplomats block your view and of course that the subjects of the picture are looking in the right direction without a blink or a grimace that would make the image unusable.

Some invitations tell these short events will last for five minutes, but they are usually much shorter. Including the walk of photographers and cameramen in and out the time left for taking pictures is usually not more than 10-30 seconds in Hungary either. This time is also spent pushing to get into a better position where the important photo subjects aren’t covered by someone (usually security guards, interpreters and other diplomats are great in standing in the picture), then the workers of the press office lead media workers out.

Obama won elections with the love of pizza?