I had a chat with a long time not seen colleague of mine just recently. Balint Porneczi had been working as a staff photojournalist for Hungarian daily Magyar Nemzet, he freelanced for AFP news agency while he still lived in Budapest, and he was also picture editor at the weekly magazine published by Magyar Nemzet. Then one day almost three years ago he moved to France with his family, where he managed to build his photography career from the ground up. Along his work he started taking unusual portraits with his mobile published on Instagram.

When he moved to Paris he didn’t like even to use a smartphone not to mention using it for photography. He used only cameras, mainly digital, but he often used film and he flirts moving to large format. However in the unknown metropolis he soon admitted the need to use a smartphone. To find his way in the new city he needed navigation, subway map and so on. Of course he found it very useful to have the whole Internet in his pockets including his mails. So he got used to using the smartphone. As he got more accustomed to use it during everyday life he also started using the built in camera as well. His career in France had a slow start, but today he is the local photographer for Bloomberg US business news agency. Meanwhile he got more and more interested in discovering what to use his cameraphone for. Balint was pursued into using Instagram by his friend Benjamin Girette who has been using it for quite some time by then.

He knew it from the very first minute he doesn’t want to take selfies or take snapshots of his meals like many do and the popular colour filters also disturbed him. First he shared his photos about his life and his family on his Tumblr, but he didn’t like the personal journal approach. He found it to be too general, so he stopped with it. He felt the need for a theme and style to follow. He wanted to create something documentary. He always loved black and white and taking portraits too. He found the works of August Sander, Richard Avedon and Anton Corbijn always inspiring for his work. This matured into his idea of creating a portrait series on Instagram. He didn’t seet up any rules but he keeps himself to certain habits he doesn’t want to change. Since he started the project he found newer, maybe better filters and photo development apps maybe better solutions, but he would like to rather make the whole project more simple. Today he would leave the margins behind, however he started the project this way so he will keep them to protect the unity of his series. All of his images are in black and white, everyone appears only once in the series except for his closest family no one ever returns. Balint takes care about the rhythm of the images not to have too similar photos following each other, have different compositions, different subjects, varied backgrounds and positions to make up a diverse collection. 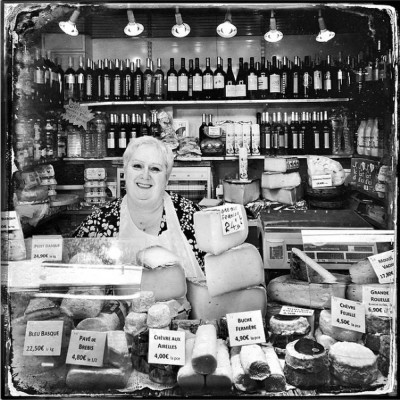 He usually takes his pictures in everyday situations coming and going on the streets. Of course these aren’t spontaneous genres. If he sees a special or characteristic person he asks for permission to take his photo. He sets up and poses hus subjects some times he has to adjusts the scene. It also happened he used studio lamps to light a picture, but it didn’t only happen for the Instagram picture. Some times he takes the mobile photos of some subjects arranged for a magazine cover shot. His subjects come from different occupations, social status, some of them are leaders of multinational companies, others laborers or homeless. He took photos in Hungary just like in different parts of France. His collection can be seen on his Instagram devoted only to this purpose and he shares them with his friends and colleagues on Facebook. His further plans are only taking shape at the moment, but some of his Instagram portraits have just been published by Paris Match.

It is worth to watch these sites:

Update: In 2015 January Balint opened his exhibition at the Paris Hungarian Institute and not only Hungary’s Index news website made a great gallery of his images but also International New York Times wrote about his project.