Not only paparazzi are in danger of their subjects becoming angry and hitting them. Just recently a nature photographer was attacked by a 200 kg gorilla. Luckily Christophe Courteau got away no serious injuries but took very special pictures just like Christophe Vasselin who captured the incident as well.

It must be a striking sensation to see this double spread photo in Paris Match. It was a great idea to show this special image this way to be able to feel the imminent danger of that fist attacking the photographer. Probably he got annoyed by the clicking sound of the camera – but maybe he just felt this is his only chance to protect his personal rights not being photographed – just like some celebrities are used to doing. 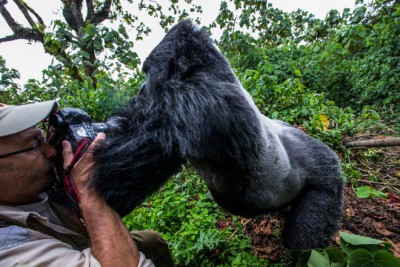 The story ran in more international newspapers and websites (Daily Mail, Paris Match, Telegraph, Metro, stb.) and Bors in Hungary. In short it is about Christophe Courteau, a french nature photographer who got a rather unusual experience with a silverback gorilla. About half of the 700 mountain gorillas live in the national parks at the Virunga Mountains close to where Rwanda, Uganda and the Congo Democratic Republic meets.
It was the male of the Kwitonda group, Akarevuro who attacked the photographer who tried to take pictures of him and the other gorillas. The nature photographer tells it was like being overrun by a rugby player and he couldn’t get out of his way of the gigantic animal because he was photographing on his knees. He tells he got a hard hit with all weight and power of the animal, but thankfully he wasn’t the real target of his anger, so the animal didn’t really care about him. The intruder was just pushed away and the male ran into the forest chasing one of his rivals who wanted to get one of his females. Images of the gorilla attack taken by Courteau and Christophe Vasselin who stood next to him spread the world together via a lot of agencies, newspapers and websites, but it is worth checking out  their images on their websites: