A couple days ago I had a chance encounter with colleague Mihaly Nagy. He is a fellow photograrpher taking photos of people in the city. He demanded to have a chance to photograph me, so I offered him a chance. But I also took a photo of him, not to be the only photographer being photographed in this story.

Mihaly Nagy is best known for his  365 day project of taking portraits of pedestrians presentedd on his photoblog and his Facebook page. The least favoured task of photojournalists is taking so called vox pop headshots. Taking portraits of  pedestrians who are asked about the topic of the day that is illustrated by a thum size headshot in most newspapers. 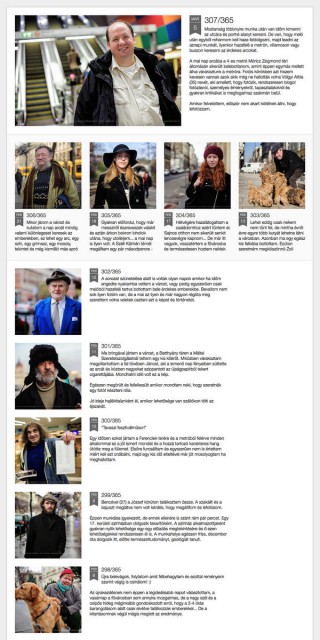 Mihay however makes this on an almost artistic level – what is not really the same thing. He dos it in an entirely different way than newspapersr do it regularly. In his case the emphasis is on the image (that is more than one image recently). He doesn’t simply take one orr two column headshots, but rather more like classic portraits, those work as a standalone artwork. Of course he doesn’t have any editors or other bosses telling him what and how to do (not in this project at least). He tries to choose interersting faces on the street and then he chats with them for a while to introduce them and the thoughts, problems most interersting them at the moment. The text acompanying his photos are some time more current, some times more CV like general introduction of the person on the photo as the situation and the conversation makes it.
What he wrote about me can be found on his blog in Hungarian, but I include a translation of it below for non Hungarian speakers. You still have to click over forr my portrait however.
Once I demanded to take a photo of him photographing me, I put this one into this post of mine.

When we met I was working on my post about  the suggestion Don’t overuse fiheye lens. Based on this idea I took a portrait of him with my fisheye lens too, but he doesn’t let me publish it. It would perfectly illsutrate why I suggets use the fisheye less for portrait photography. Of course I would not show it with a good heart.

Translation of the interview with me:

These days I mostly have time to go out and take portraits only after I finished my job. It also happens I have to rush after work to edit and send the photos. In these cases I usually look for the interesting faces on the metro, tram or bus. I stumbled upon today’s face on metro 4 at Moricz Zsigmond square while we stood next to each other on the station waiting for the next car to arrive.
Among photographers I don’t think anyone needs an introduction to Attila Volgyi (35), who is not only a photographer, but also writes a blog about photography, personal experiences and often criticises certain phenomenons inside or around photography.
When I suggested, first he didn’t want to be photographed. On one hand he was in a hurry to a press conference at Parliament, on the other hand he doesn’t like to be in the center of attention. However I was happy for his reply when I mentioned him my blog: “Ahh, you are that one Mihaly Nagy?” 🙂

In the end he agreed to return there and do the photo session and the interview a few hours later. We talked about a million things. Before he became a photographer he tried some other things. He has been a translator, worked in commerce selling still and video cameras in Electro World, he studiedd television journalism, communication and information technology. He ended up in photography, what he started as a teenager at a closeby analogue lab, but really got into it in the digital era. During these times he photographed more and more and after a while photography became a vocation of his. He works mainly as a photojournalist, the other genres he rather keeps an eye on and writes about them on his blog.

Durring the years he heard and experienced a lot of things in this profession what he tries to share on his blog. The first attempts with his blog date back to around 2008-2009. Originally he just started to experiment with the technology. He was curious, what can be done with a blog. Then he got the feel of it and by now he has one of the best known blog about the profession of photography. His motto is “Photography is not about photograrphy, but about what you photograph. Mostly about people. Equipment used is just a tool for the trade.” In this spirit he tends to care less about cameras and more about different topics and questions interesting for photographers, ethics, personal and copyright laws.

“For blogging one needs some message you want to relay to people, because the transmission itself has no point without the message. Photography is mostly similar to this. In an ideal situation we take photos not just to be taking photos, but to show something with our images.”

He gets the inspiration for his articles from a lot of things. He has an endless source of ideas. Something popps in his mind on the way to work, he overhears a conversation, sees an image or some situation arises during his work that reminds him of something to write. If he has the chance he tries to instantly note his thoughts. If he can’t, he tries to keep it in mind until he can make notes. It also happens with him quite often as he writes a post about something and two other ideas come up to write themm, but he also rerceives a lot of questions from readers. “I have a couple hundred great topics I should write for the blog some time, I just don’t find the time usually to complete everything I start.”

He has very detailed posts on his blog about a lot of things, so he answers to a lot of questions it’s easier to read it on his blog. Yet it often happens with him when someone asks his opinion about something and he gets reminded he plans to write about that thing for years or maybe he even already started it, just could not complete it. In these cases he tries to complete the missing part to avoid rolling overrhead stuff in front of him. When we met he was in the finishing touches of a post about the overuse of fisheye lenses. We had a good laugh when I suggested maybe I won’t take his portrait with a fisheye – however he took such a photo of me, what I didn’t allow him to publish, but he had no objection against it.

Career tip: Rather work as a food currier!

Jimmy won me picture of the day