American soldier killed by German snipers on the balcony of a house in Leipzig on April 18, 1945.
Photo by Robert Capa

We don’t know it for sure if he was really the last soldier to die in the second world war even on the Allied side. It’s quite possible this is not truly the last soldier as the war in the Pacific ended on September 2nd 1945. Robert Capa however photographed his death as last and thus he is remembered to be the last allied soldier to die in the war. What makes this all most important is how Capa thinks about him in his only partially fictional autobiography, Slightly Out of Focus (you can buy it online at Amazon – and you can support my blog with it too):

“I was with a battalion of the 5th Infantry Division. We reached a bridge leading into the center of town. The first platoons were already crossing it, and we were very afraid it was going to be blown up any minute by the Germans. A fashionable four-story apartment building stood on the corner overlooking the bridge, and I climbed up to the fourth floor to see if the last picture of coruching advancing infantrymen could be the last picture of war for my camera. The bourgeois apartment on the fourth floor was open. Five GI’s belonging to a heavy-wapons company were putting up a machine gun to cover the advance over the bridge. It was hard to shoot from the window, sothe sergeant and one of his men moved the gun out onto the open, unprotected balcony. I watched them from the door. When the gun had been set up, the srgeant returned. The young corporal pulled the trigger and began to shoot.
The last man shooting the last gun was not much different from the first. By the time the picture got to New York, no one would want to publish the picture of a simlpe soldier sooting an ordinary gun. But te boy had a clean, open, very young face, and his gun was still killing fascists. I stepped out onto the balcony and, standing about two yards awe, focused my camera on his face. I clicked my shutter, my first picture in weeks – and the last one of the boy alive.
Slilently, the tense body of the gunner relaxed, and he slumped and fell back into the apartment. His face was not changed except for a tiny hole between his eyes. Te puddle of blood grew beside his fallen head, and his pulse had long stopped beating.
The sergeant felt his wrist, stepped over his body, and grabbed the machine gun. But he could ot shoot anymore, our men had arrived at the other side of the bridge.
I had the picture of the last man to die. The last day, some of the best ones die. But those alive will fast forget.” 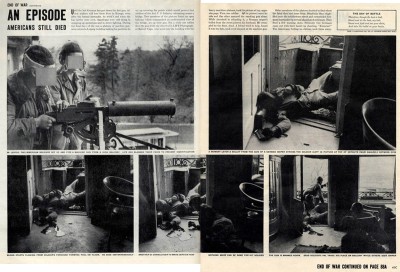 The photo series about the last fallen soldier was published on a double spread by Life magazine with some text added to it next to the title An Episode: Americans Still died. Photo copies of the publication found online have the faces of both soldiers masked out (probably in honour for their death).
Brother of the photographer, Cornell Capa donated a 28×36 cm paper print of the last fallen soldier photo to the Kecskemet Hungarian Photography Museum in Hungary.

Slightly out of focus – Memories of a War