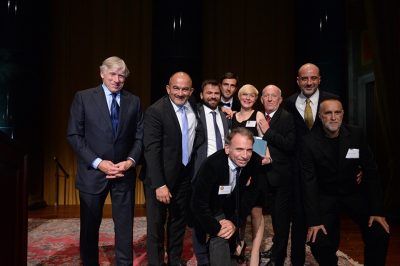 The award winning Reuters photographers and Lee C. Bollinger (balra), president of the Columbia University who handed over the prize to them
Photo by Pulitzer-award

Like the website of the prize and many of Hungarian news media riport an 8 member team of Reuters with their coverage of the migration crisis stretching through Europe.
The prize was won by the eight photographers together for their joint effort including two of my Hungarian colleagues Laszlo Balogh and Bernadett Szabo. The other members of the team are Yannis Behrakis. Michael Dalder, Stoyan Nenov, Alexandros Avramidis, Alkis Konstantinidis and Srdjan Zivulovic. 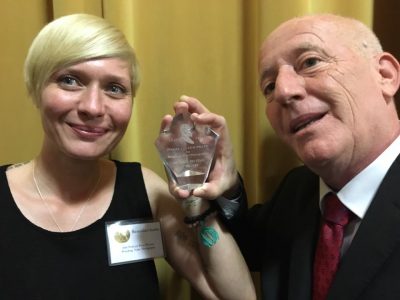 The award founded by the Hungary born journalist who migrated to the US and made his career there was given for the first time to Hungarian photographers – instantly two of them at once and Bernadett Szabo became the first Hungarian female photographer to win it.

The winning series of the  Reuters staff got also exhibited as a side event of the World Press Photo exhibition in Budapest along with an extra selection of the photos taken by the two Hungarian photographers during the migration crisis. Here you find the pictures by Bernadett Szabo and the photos by Laszlo Balogh.