I had no time to write it any earlier, but I thought it is an important copyright story that needs to be published on my blog. After all the time I spent writing about similar copyright stories this one needs to be recorded here too.

Edited photo without the author’s permission
Arc Billboard Contest is a competition for humorous graphics that deliver a message related to an important social issue either global or local to Hungary. This year’s contest had an exhibited entry made by Denes Petak under the title Timeloop. The billboard was created using a photo from 1988 during Hungary’s changeover. The then opposition party leader Viktor Orban who is now the prime minister was held down by two policemen. The editor of the billboard used two photos showing the face of the now prime minister Viktor Orban and pasted them on the faces of the two policemen. This editing implies that the current prime minister uses similar methods like the former communist regime he used to fight against and shows him to be the one who ties down the opposition party politicians like he used to be once. This billboard reacts to the current actions of the government tightening control of NGOs operating in Hungary that is the main theme of the billboard contest this year.

Since the author of the original documentary picture Eva Kapitany refused to permit such use of her image, the organisers of the billboard contest had to cover this billboard.

As the organisers Facebook oldalukon a kiállítás szervezői and in daily Magyar Nemzet, soon after they were informed by the copyright holder’s denial they covered the billboard in a way that the newly added faces were left in their places, but the original picture got covered with a grey sheet of paper.

I don’t want to take sides in regards of the intentions of the billboard, but I think it is a very important and interesting case of copyright use and/or infringement. In theory the copyright holder may choose such an action to protect the integrity of her work and to prevent such misuses of it. The organisers of the contest took the best action what they were able. They also stated they don’t agree with the decision of the author, but their lawyers don’t think they could win such a case that could draw long at court and they don’t risk loosing it.

It is not a coincidence most contests have it in their terms of participation (among many others) entrants have to take full responsibility for all the copyright and personal rights consequences of their submissions to waive the organisers of all such demands.

I silently add that it is an interesting question where the editor took the pictures of the current prime minister as their creators could also apply to have their pictures covered too. 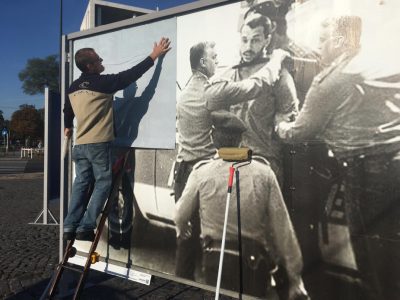 Is freedom of speech or copyright stronger?
More and more opinions say the copyright protection should leave room for such artistic implementations as a form of political satire and the freedom of speech and artistic creativity. Dr. Peter Mezei author of the Hungarian language blog Copyright in the 21st Century says based on both Hungarian and EU regulations this case would not be so much lost as this is not a violation of the copyrights of the original work and doesn’t need the permission of the author. He thinks the organisers didn’t need to cover the billboard however they could only prove this to be a valid claim over a long drawn court case and many other lawyers think the jury could decide otherwise. As news website Hir24 also mentions a lot of copyright lawyers are looking for such a case to test how Hungarian courts would deal with such a case and to make it more predictable how such cases get to be ruled in the future. Until someone goes to court with their case all this is pure speculation.

Even more people got to know it
As the article of daily Magyar Nemzet writes the organisers confirm this legal dispute drew even more attention to the photo (both the original and the altered one) and the exhibition than it got before. This phenomenon is known as the Streisand-effect. It has been documented many times that such denial and legal actions to remove a content can backfire and shade more light to the thing attempted to be vanished than it originally caused without the additional fuss. 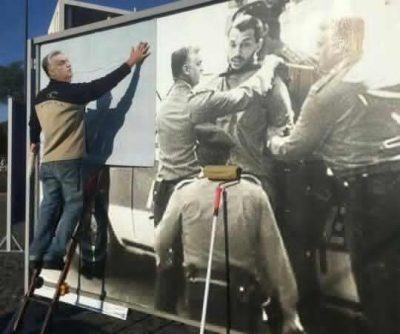 The Copy21 blog also writes US copyright law clearly allows other artworks to be used for artistic purposes. However this type of freedom can also be misused or abused like I already mentioned some cases on my blog before.

Internet artists and meme creators are however are hardly to deterred and just like in the case of wether photographing police officers in Hungary is legal and many other stories some quite interesting new works appeared. Including the one where the picture of the policemen Viktor Orban blocking the opposition Viktor Orban is covered by a man with the head of Viktor Orban to complete the story.