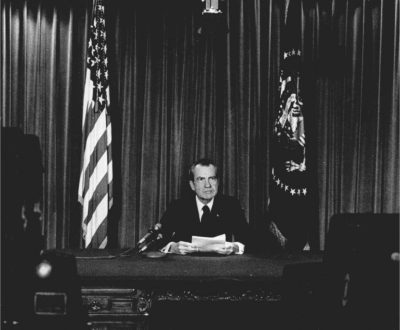 Richard Nixon was the  36th president of the United States of America who announced his resignation on 1974. august 8. following a corruption scandal. He announced his resignation in a historic television speech. The president stepping down from his office had a fight before the broadcast and he sent him out not to take any photos. The photographer wanted to take more photos, but the president demanded he already had enough of them.

This way there were no photos taken during the actual resignation just about the preparations before. (There were lots of debates about the importance of wether photos are taken during the speech or just before/after in regards of president Obama’s relation to the media). Not only the media, but even White House and historic archives don’t have any more photos of this event.

In the collecion Nixon Museum there are over 350 thousand photos about Nixon’s presidency between 1969 and 1974. Out of this considerable amount only(???) 7000 were taken by Nixon’s official White House photographer, Oliver F. Atkins.
The archive holds about 4000 movies and 4469 sound recordings among one of the most important is the resignation speech itself. It’s voice recording can be found on Wikipedia as well as the transcript of the speech. 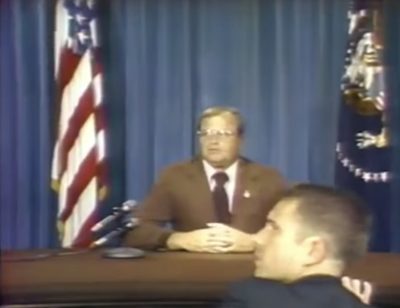 Because the speech was broadcast live by not only radio  but television as well of course it is available in video  too. At the beginning of the recording Atkins, the official photographer also appears. He sits in the chair of the president during light testing. When Nixon enters he starts making jokes about he should stay there as he looks better than him. Then he starts joking abouth blondes taking better photos than brunettes and he always taking a lot of photos of him making him afraid to get caught picking his nose. Later he moves to a more rigorous tone demanding Atkins to leave the room. After some debate he poses for some photos, but motions the photographer out. After this incident he banters with secret service officers and the TV personnel before starting his speech. (In the video below you can see the photographer in the beginning and the banter with him then he is sent out at 2:35.)

Nixon: “Olly! No, only the CBS crew now is to be in this room during this, only the crew. No, no, there will be no picture. Didn’t you take one just now? That’s it!”

New Yorker published a video about how US comedian Harry Shearer (voice of Mr. Burns and other characters in  Simpsons) recreates events in the White House with a surprising realism. The scene is part of the series Nixon’s the One that was shot using original recordings of Nixon and creators took great care to recreate everything with an eye for details.
Even the photographers’s presence and work appears in the video. More than that even the original jokes with the photographer, TV crew and secret service are included. It is worth to watch it after the original recording above.

On the hundredth anniversary of Nixon’s birth in 2013 Hungarian news site Index made a  big picture gallery titled Who was made a president by two dogs. In this selection there was no place for the resignation speech. In August one year before they included two photos of the event in the  gallery on the anniversary of Nixon’s resignation, but both of them show the president on TV screens and none is from the official photographer Atkins. 40th anniversary gallery of newsOK however included this photo too. 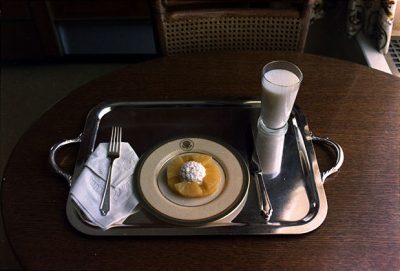 However this last photo wasn’t taken during the resignation speech it connects to the story well and it is a nice closure of the Nixon presidency. Photo of Nixon’s last lunch in office was found in the White House archive. From 1974. august 9. noon he was no longer the president off the United States. He was followed in office by president Gerald Ford.

Media had a small window on Obama

Rules of photographing elections in Hungary