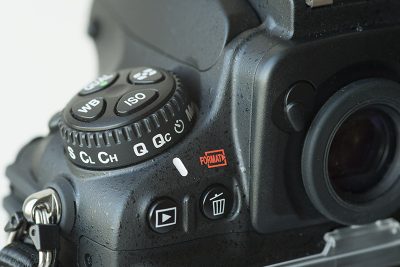 Silent mode on a Nikon DSLR
Photo by NatureTTL

It happens more and more often during photographing various events that someone is disturbed by the clicking shutter sound of a DSLR camera and people ask photographers to turn off the sound. The photographer often just blinks not finding the words to reply. Clicking sound is not just an effect with a DSLR camera just like with mobile phones and compact cameras. It is an integral part of the function. Many photographers however has no clue about even DSLR cameras can be silenced. More than that it is very much advised in certain situations. If it is not possible than even more routine and knowledge is required to avoid disturbing others. And no, simple because you “have to” take photos doesn’t allow you to disturb others. 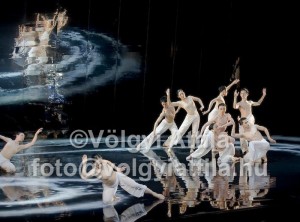 Cloud Gate Dance Theatre from Taiwan performs in their piece Moon Water at  the Festival Theatre at Palace of Arts on April 27.  2009.
Photo by Attila Volgyi / blog.volgyiattila.com

When silence is needed!
Clicking sound of cameras means different level of disturbance in various situations. There are cases where it isn’t even recognised. There are a lot of special situations when the smallest noise can be very disturbing. Especially the low volume talking events, video and movie shootings, symphonic concerts, ballet and other silent dance performances. Some funerals, weddings and other ceremonies can also be such where the organisers can feel disturbed or even humiliated by one (especially more than one) cameras constant clicking, blinking and other sound and light effects.

Photographer should not  disturb the event!
There is an ever growing number of photographers who don’t hesitate to stay discreet and keep pressing the shutter with long burts and without consciousness of the event. I even met some photographers upset for being warned and claiming “I have to take photos”. On one hand you don’t have to. There aren’t many photographers whose photos are more important than the event itself and the undisturbed enjoyment of the audience. Even photos that qualify as such can also be made much more discreetly. It just takes the right photographer with the right equipment and the right expertise to fulfil the assigned task. 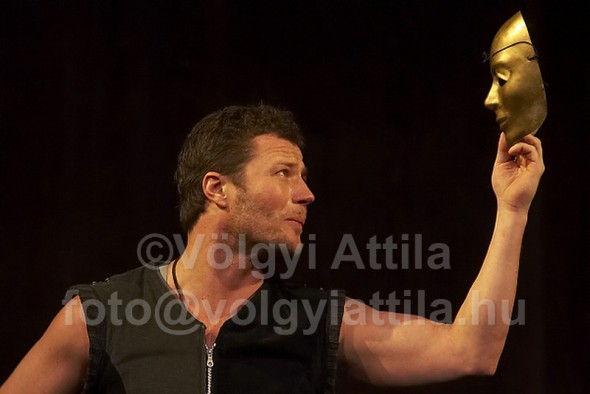 Viewers and even the organisers can at times react in a hostile way to disturbing clicking sounds. And are right in this most of the time. At times even kicking out and banning too loud photographers happens, but warning them to stay silent is the bare minimum. The bigger problem with this it harms to the view on all photographers. Any photographer coming next time will be judged by the mistakes and problem caused by the previous ones. This usually this growing suspicion, dislike, more restrictions and narrowing possibilities. Once a photographer was too loud all the others coming later will be considered to be problematic and they will try to prevent him causing any problem – even if he wouldn’t do so as he already knows better than that. However for the organisers silence and the enjoyment of the audition is much more important than publicity or good photos. It is always much easier to forbid, prohibit, ban and block than wait and see if there is any problem to be dealt with. At some venues photographers are exiled to some balcony or even banned completely. It is worth to stay cautious and silent!

Shutter sound is a great problem
Otherwise silent churches, funerals, theatres and symphonic concerts just like movie shooting shutter sound is a long time problem. It have happened countless times that “noisy” photographers got sent out. Their noise can be unacceptable and rather have no pictures than have them disturb the event. 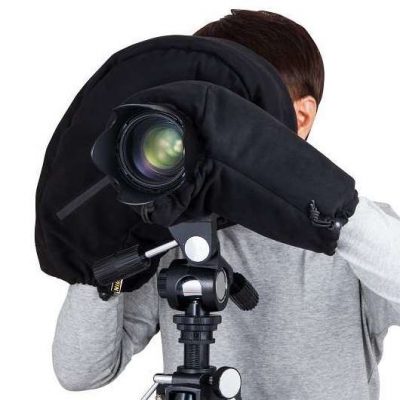 There are sound suppressors
During the changing times the more discreet photographers developed various sound suppression methods to decrease the noise their cameras caused and the confrontations attached to it. They used canvas or leather covers or some giant underwater equipment like blimp boxes to keep noise inside, separated from their surrounding. It also helps not to take breath during exposures and time your photos not according to the movement on stage, but to when the music or the audience is the loudest to conceal your clicks. Some wrap a scarf, towel, pullover or some other textile on the camera. When no other chance left they tried to take photos from as far as possible – necessarily with a longer telephoto lens – to be as far from those could be disturbed by the clicks. 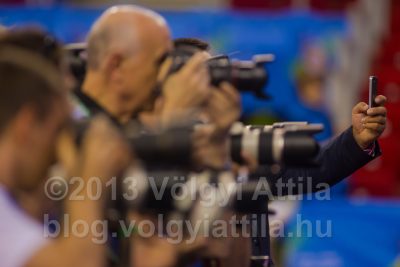 DSLR, compact camera and phone can be loud too
Photo by Attila Volgyi / blog.volgyiattila.com

Turn off your sounds
With the spread of digital photography also clicking, beeping  and other camera noises are more common – also more disturbing. More and more people start to take photos not caring about others around them and how they may disturb others. Thankfully on the more common cameras and smartphones it is possible to simply turn off the camera sound.

On iPhones for this you have an extra physical switch next to the   volume buttons (for a while it has optional other features too so it is based on settings).
Switching the flash fromm auto to off you can avoid your flash to light up taking photos and disturbing the event. It is worth to use your phone on default settings, but at least in such cases you should check the settings to know if it will flash or not when you take photos. For those who don’t think of fit by themselves usually some of the neighbours will give a reminder to do so or rather don’t disturb the event. 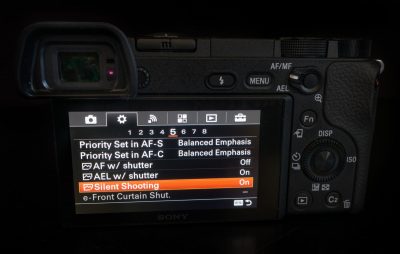 More quiet without a mirror
With the apperance and fasst spread of the mirrorless MILC camera category this problem started to solve itself. Leaving the moving mechanical parts out of the camera has an important advantage of not having the loud mirror any more. There are still moving parts, but much less and make less noise during use. More than that there are some types (unfortunately not all MILC is like that – yet?) that can totally turn off the mechanical shutter to make the camera more silent. Motors and other mechanical elements in the lenses can still make somme noise. At some very quiet events these can also draw some attention or even disturb the event, but has much less chance of it than with clicking DSLRs. 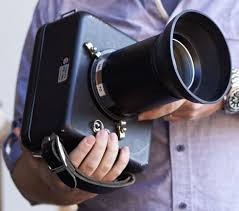 The blimp suppression box
Click for tips how to DIY!
Photo by Blair Bunting

DSLR has solution too
Those who take photos with DSLR often find it strange when they are asked to turn off the camera sound. Some don’t even understand how people get this idea. It is integral part of the function of the single-lens reflex cameras to open up the mirror then the shutter opens and closes for each exposures.
Photographers are less familiar with the traditional film age sound suppressors thus they don’t use them either. However there are times when they still come handy or simply irreplaceable.
The newer and more advanced DSLRs tend to have a silent mode. This usually only blunts the click of the mirror. It makes it softer, quieter, but still hearable. In most cases the camera is as much quieter this way to make it worth using. Even if most cameras don’t allow a burst mode in silent mode and some times the reaction time (also known as shutter lag) can also increase this way also making it harder to catch the moment. 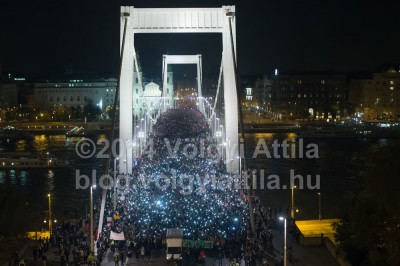 Spectacular at a demo, disturbing in a theatre
Internet tax demonstration on Budapest’s Elisabeth bridge on 2014. October 28.
Photo by Attila Volgyi / blog.volgyiattila.com

LCD light also problematic
As most MILCs lack a view finder their owners tend to use the back LCD screen. This is also problem in a dark environment like a theatre. Of course DSLRs  also have an LCD and this lighting up in the dark for review can also be distracting for the viewers or even for the performers. Almost as much – or in certain cases maybe even more than clicks. This only distracts another of the human senses. Using cameras with an electronic view finder (EVF) and no need to use the back LCD you only have to watch out not to turn on the back screen. Some cameras let you set this in the menu or you can stick a piece of duct tape on the sensor to cheat it to think you hold it always to your eye. 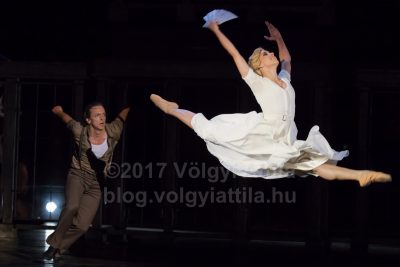 AF beep, AF assist light and loud old lenses
On my blog I basically write about professional photography. However amateurs and their mistakes can cause problems to professionals too. So I have to spare some thoughts on this as well. Most cameras have a beeping sound for AF confirmation. This can also be seen in the viewfinder visually (blinking, AF frame changes colour, an icon lights up or a text appears – depending on both manufacturer and settings). I think there is no point of using this beep. I don’t question other’s decisions. Some may find his voice confirmation to be useful in addition to the visual signs. However at a lot of silent events these beeping sounds can be extremely disturbing when a photographer beeps during a conversation, theatre play or symphonic concert. Please be so kind to stay discreet and turn off the beeping sound! I prefer to turn it off completely always, but you should do so at least for quiet photography situations.

Other than clicking and beeping there is only one worse during theatre photography. Blinking lights can even disrupt dress rehearsals strictly open to photographers without viewers as well. A live play can be disturbed by it even more. Strength of the light is different, but the disruptive nature of light is no different when you use a flash for your photography or just use your AF assist light of your camera. Both lights can draw attention from viewers and performers alike. More than that it can greatly ruin photographs of others. Please turn them off – either you are photographing with permission officially or just as a viewer, with a more serious camera or just using your phone.

Please pay attention not to disturb others with your photography!