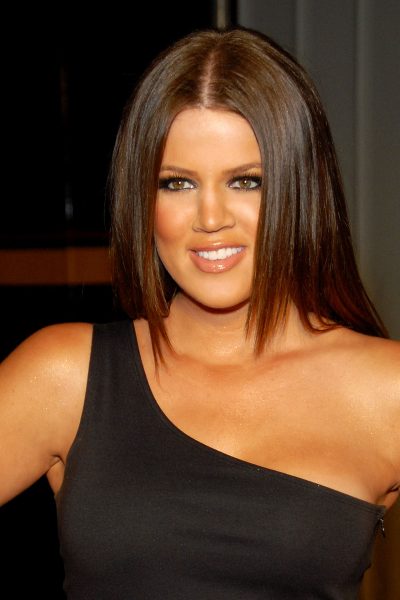 More and more news are coming about stars getting sued by paparazzis for infringing their copyrights and a series of fan pages being deleted by social media sites for the very same reason. It seems some celebrities and fans have a hard time understanding they cannot just grab photos and use them as they want.
Photographers in the mean time have a hard time accepting these rip off so they go into court against world famous people as well – and they win these cases too. As an end result however after getting burned themselves celebrities started to educate their followers too.

Shifting trends
BBC wrote an article about the shift in trends. These days it’s not the celebrities dragging paparazzis to court, but the paparazzis (and their agencies) sue celebrities. The reason is not the celeb’s over the top reactions but copyright infringements.
As I wrote bout it on my blog many times, like in my post about  most common baseless excuses of photo thieves it is a common misconcept to think you can use a photo without the permission of the copyright holder. Any use of the photo needs permission from the photographer. It is no different with paparazzi pictures either. Some times however stars – just like everyday people also forget about it. However if someone has hundreds of thousands or even millions of followers and make millions with their fame can take it for granted to get sued for illegal use. Various articles list a number of stars involved in such stories. Maybe the latest mention was Gigi Hadid’s Instagram repost, de Jennifer Lopez and NFL player Odell Beckham Jr. is involved.

Khloe Kardashian was among the first ones
Many sources mention Khloe Kardashian to be the first one in such court cases. She posted a paparazzi photo on her Instagram. British agency Xposure Photos sued the reality star for $175 thousand in compensation. The agency claimed sharing the photo on the (then only) 67 million follower Instagram profile constituted “wilful, intentional, and malicious” infringement of their copyright. Especially considering however she didn’t have the time to ask for permission, but had the time to crop off the credit line originally included on the photo by the newspaper legally publishing it.

Article of The Fashion Law quotes from the documents of the court case Kardashian is not using her Instagram account now reaching 91.1 million follwoers. She uses it for building her personal brand, promoting her business ventures, and sells products on it what clearly makes it a business use not personal. The celebrity later deleted the photo in question and she made a mutual agreement with the agency to dismiss the suit thus we don’t know how much this copyright lecture cost her. 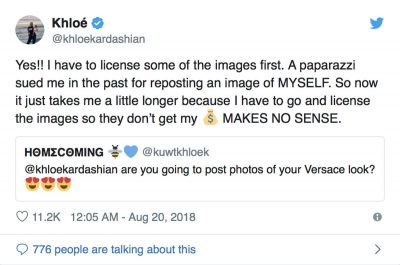 Khloé: “Yes!! I have to license some of the images first. A paparazzi sued me in the past for reposting an image of MYSELF. So now it just takes me a little longer because I have to go and license the images so they don’t get my money MAKES NO SENSE.”
Click the picture for the Tweet!

Deleted fan pages
Her Twitter post says since then Khloe Kardashian licences all her photos, but she is unsatisfied with the situation, becauuse it slows town the process of posting images of her appearances – not to mention it costs her money. Fans however still don’t care about copyright and because of this agencies keep getting fan pages deleted from various social media sites. Comments made by Kardashian suggest she still doesn’t understand the concept of copyright.

As BuzzFeed’s article (and Instagram/Twitter comments cited in it) shows dozens of Kardashian fan pages were deleted for posting illegal photos. Some of them having even millions of followers. Fans are complaining because they claim not to run these pages to generate any income for themselves and they grew up with these sites having the work of their life in sharing photos of their favourite celebrity on them thus they are upset for others ruining this.

Desperate fans even started a change.org petition to get social media sites accept fan’s share of pictures to be a fair use case and not to face copyright consequences for it. Of course this wouldn’t even work this way if they would get the choosen amount of signatuures in support. Fair use exception is much more limited and requires a level of added value or some respected social value like using copyrighted material in the education system. Most of all however it works on a case by case basis. Seriousness (or rather the lack of it) of this petition attempt is showed by the fact despite building up accounts with millions of followers they couldn’t get even three thousand signatures out of the five thousand goal in nine month.

Kim Kardashian West: “I hate that the paparzzi agencies get all of the fan accounts shut down! Ugh we have to think of something! Maybe start our own agency? And let all of the fans post whatever th they want!!!!! Let me brainstorm w the fam!
Click the picture for the Tweet!

Celebrity owned pap agency?
Khloe’s sister, Kim Kardashian suggested she will hide from paparazzis in the future not to allow them take her picturue and maybe their family should start a pap agency to provide fans with free photos. 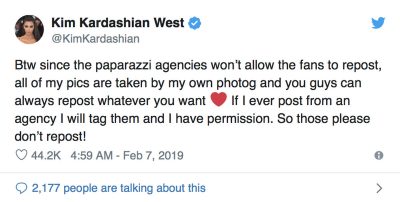 Kim Kardashian West: “Btw since the paparazzi agencies won’t allow the fans to repost, all of my pics are taken by my own photog and you guys can always repost whatever you want <3 If I ever post from an agency I will tag them and I have permission. So those please don’t repost!
Click the picture for the Tweet!

A few month ago she told her followers since disputes with agencies her photos are taken by her own photographer and those pictures can be shared freely by all fans. If she uses an agency photo she promissed to tag them and asks the fans no to share those to avoid copyright violations nobody wants. It seems they started to educate their followers to perform the right way.

Times are changing
It is a very interesting shift in trends that celebrities now don’t complain for being stalked by paparazzis intruding into their personal lives, but for not getting the pictures to use them for free. More than that celebrities seem to admit they need these paparazzi photos too and they start to fight for their existence and get more and more people access them. After getting burned by copyright infringements they also started educating their followers for the right behavior.