I got involved in a very interesting debate with a few colleagues about photographing the recovery of the capsised and sank passanger boat Mermaid. Some of them were complaining for  some of his “really good” photos not getting published because TEK (short name for Hungary’s Counter Terrorism Centre) banned them.
At first I fofund it strange TEK had some clauses about honouring the dignity of accident victims. I didn’t believe it needs to be told. I maybe even considered it to be overanxsious they printed a document for members of the media to be signed. This dispute however made me understand the fact that some people need to be told not to be disrespectful.

TEK made us sign a document to be allowed near the accident site and be able to take photos. In this document they summarised to the general laws on media reportage and emphasised the current situation’s legal and funerary aspects. To be allowed onto the area closed off from public and be able to directly see the recovery procedures every media worker had to sign this document in acknowledgement of being informed about the regulations and responsibility of coverage.s

In most cases I strongly oppose all reduction of press freedom or attempt to influence media coverage. Regardless it is done by restricting access to press conferences, wilful hardening working conditions of the media, censoring and permission restricting some articles or even asking for free photos or other compensation or simply banning photography and handing out censored images. In this case however I cannot think the “power” made any bad move. Especially as their statement required from media workers didn’t contain any additional requirements that aren’t already written into law, making them mandatory without this document. All this is just about informing media workers what regulations they have to obey (anyway) in the current situation. Just like with contracts usually they practically protected themselves to be able to tell, they made everything possible to keep media coverage in a reasonable manner – without unnecessary restrictions.

Time-lapse of bringing up boat Mermaid from the riverbed
Click the image for the time-lapse!

I don’t see any problem with the authorities emphasizing the responsibility of media workers for the content of their coverage. Even if this means a soft pressure to make you think about not to make any dumb thing or it may have consequences. In this situation I cannot interpret it as a negative move or one going against the public interest. I cannot really think of any pictures I would be interested in seeing that cannot be published following these guidelines – or anyone should miss not seeing them them. 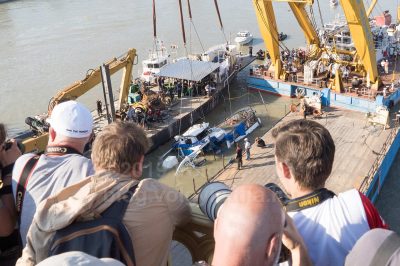 Some colleagues talked at the event about “here a leg is hanging out” or “there a corpse wasn’t fully covered”, etc. We also discussed with some colleagues if it is a mistake to photograph these or it is part of the job to document everything and then later we and the editors can decide what to show from this and what not to. (Of course it is much harder in the current times of live coverages, especially on live TV broadcast.)
We may also debate if it is a professional mistake when I didn’t even want to take a photo of visible corpses and bodyparts. I don’t really want to take such pictures if this is required from me (except of course working for police or other first responder organisations not media – of course they too may use them only for documenting for them not for publication). I don’t even show all my photos I took during the process – especially not in social media…

Authorities didn’t even ban to photograph anything. They mentioned there may be moments when they will tell us to put down the cameras and not to take any photos. This might have had changed my mind about their restrictions, but it didn’t happen (at least I didn’t hear such order or request, neither from the police officers present nor from colleagues who would hear such). I  can imagine, but would rather not describe the scene what would make me agree even with such a strict ban of coverage. In the statement however they only point out to work with responsibility and abiding by the laws. This is not at all an over control or censorship in the current situation.
I even talked to more colleagues who explicitly think the Counter Terrorism Centre (TEK) was extremely cooperative and helpful with media. As much as the situation allowed they gave up to date infurmations, made statements and gave interviews as needed, held regular press conferences. Even it is a big thing they allowed media to go to the bridge right above the crash site. Not to mention they didn’t restrict our work to a small area, but opened most of the South side of the bridge for us to work and move freely as we see it fit. They couldn’t do everything flawlessly and even I had some difficulties because of it, but in general they did really well. In many things they over performed and could be an example for even the media officials who work regularly with media and in more controlled and calm situations. Especially considering Counter Terrorism Centre is by origin a more secretive and closed institute not really welcoming for the interest of media.

TEK statement
Only signing this allowed journalists to cover the recovery works.

Statement required by the Counter Terrorism Centre (original English version provided by them):

DECLARATION OF LIABILITY
I, the undersigned name:
nationality:
place and date of birth:mother’s name:
name and data of the media content provider:

certify that I conduct the press coverage (hereafter: the activity) of the search and rescue mission – in particular, the lifting operation of the wreck from underwater – of the vessel „Hableány”that was involved in a water accident in Hungary, Budapest, on the river Danube near the Margaret bridge on the 29th of May, 2019, at 9:05 PM (hereafter: water accident) to my liability, according to the following.

While executing the activity, I will comply with the laws and provisions of Hungary regarding media content regulations and professional rules, in particular the Act CIV of 2010 and its provisions on the Freedom of the Press and the Fundamental Rules of Media Content (hereafter: Smtv). I conduct this activity voluntarily, on my own will, independently of any outside influence.
I acknowledge that based on the 21. § (1) paragraph of the Smtv, the media provider isheld responsible for complying with the laws.
I hereby certify that I am eligible in every aspect to carry out the activity and I am in the possession of the required documents.
I hereby certify that I have received the required information from the authorities in charge of the rescue mission of the water accident regarding the site and the safe fulfilment of the activity and I am aware of the risk factors of carrying out the activity; I conduct the activity on my own free will, on my own responsibility.

In the Hungarian version of this post you find the exact legal excerpts from the corresponding paragraphs of the law. I skip quoting them in this English version as I don’t have their English version at hand and I would rather not go into debates if I can translate it well enough. I don’t think it would be so important for the non Hungarian speaking audience.

One year passed since the Mermaid catastrophe