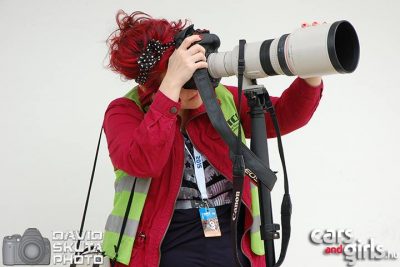 Erika Kaiser in work – with the stolen lens
Photo by David Skuta/CarsAndGirls.hu

Really expensive photography gear was stolen from the photographers’ room at Hungaroring this weekend. The victims filed charges against the unknown perpetrator and police started the investigation. You however take it as a reminder to always be on alert for your gear to never suffer similar losses!

Of course it is worth to be very careful when buying used gear. It is easy to run into some stolen goods on the second hand marrket.

It cannot be emphasized too much how important is to be careful with the gear:

Hungarian photographer Erika Kaiser posted on Facebook her experiences with two of her white Canon telephoto lenses being stolen at Hungarian Formula 1 Grand Prix last weekend. The missing pieces are a Canon EF 70-200/2.8 L IS USM II (serial nr.: 4920006927) and a Canon EF 300/2.8 L IS USM (serial nr. available later) lenses.
Her post includes the theft happened on the last day of the race. She was packing after multiple days of hard work after the race in the photographers’ room when she discovered her lenses were stolen from her desk in the photographers’ room.

During the time of this writing additional news arrived about another long lens being stolen at the same time. A Getty Images images photographer was stolen his Canon EF 600/4 L IS USM lens. His lens was stored under his desk where he never found it again. 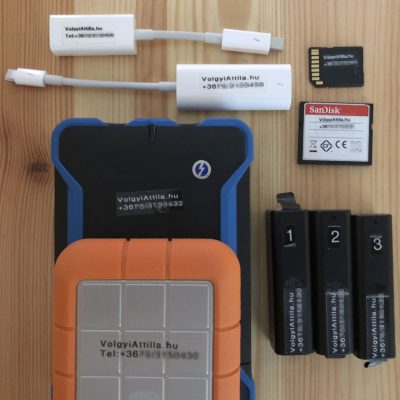 Label your every gear with name and contact!
Click image for details!
Photo by Attila Volgyi / blog.volgyiattila.com

Unfortunately this is not the first time I have to write about similar stories on my blog. It is a devastating experience, but it also happens that photographers steal from each other. Especially at such large scale events with large crowd. Mostly the last days are dangerous for loosing things in the busy place – either to thieves or disregard. Also unintended mistakes can happen, however in this case it is highly unlikely someone would unwillingly put away three large glasses. Thefts aren’t rare enough. It happens even at Olympic games (here we even have a video recording of how thieves worked at the Rio Olympics) and other large events, stealing smaller or larger items.
At Formula-1 Hungarian Grand Prix I never heard such stories before and press officials of race track Hungaroring don’t know of it ever happening before here. In motorsport photography circles however have quite a number of such stories from races around the world. They list Barcelona and Monza to be particularly dangerous for gear thefts of cameras and telephoto lenses.

Be careful and take the above mentioned necessary precautions!