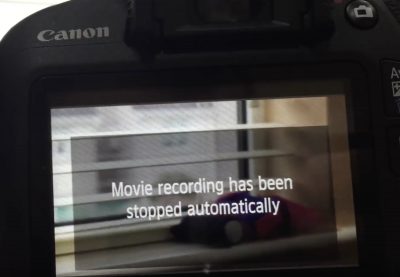 EU regulations changed recently that (at least in part) caused still cameras to have limitations on video recording length. Administrative obstacles are gone now. It is up to only the manufacturers whether their cameras will have video recording limits or not.

It is an ages-old story I wanted to write at least as long ago on my blog, but I couldn’t get to it until now. Not too long ago a reader called Zsolt brought it up in a conversation and I went after his story to discover the details. Now it is more timely than ever I decided to write about it finally.
So the EU regulation is gone, it is only a question when the manufacturers decide to use the possibility they got. It is an even bigger question if they will include the longer recording capability only in their newly released upcoming cameras or they will add into older cameras as well with a firmware update.

It is history now
The older part of this story is the previous EU customs regulation that appoints a higher duty tax to video camcorders than to the still cameras. At least in part, this is the reason why manufacturing companies cripple still cameras with limited video recording capabilities (usually in 30 minutes).

Regulation change from July 1, 2019
Local representation of the European Union in my country Hungaryhelped me to discover the regulation and the story behind its change.
As we discovered from 2019. July 1. EU changed common customs tariffs under the support of the „Information Technology Agreement” (ITA) and the World Trade Organisation (WTO). This international agreement aimed to reduce the taxes on information technology import to zero. during a longer period of years. The next step in the agreement comes into legal effect on the 1st of July every year.

Not only legal restrictions exist
It is fake naivety to hope for such a retrospective feature addition with a firmware update. In part, because manufacturers have to sell their newer machines as well – that gets harder and harder for them every day as smartphones still keep conquering larger parts from the camera market. None of the manufacturers can afford to develop cameras in a too large scale for free as it would undermine saleability of their next products. It is more profitable for them to introduce new features only in the next models instead of just giving it away for free.
Of course, video recording has a technological barrier as well. Large data density of videos can put a big strain on most of the camera’s electronics – 4K videos in particular. The image sensor, processor, internal buffer memory, writing the card and all parts of the camera are running on a maximum performance that generates heat. The more data density generates more heat. Often the entire camera gets baking hot during a longer video recording. Many cameras can even overheat and stop recording or simply freeze. Some times even the write speed of the camera can stop video recording. In certain cases, camera manufacturers cutting their cost on the cheaper card sockets can also cripple the writing speed of a camera. This also means the probability of firmware updated removal of recording limit is diminished by the need for additional hardware development to support longer recordings.

However legal restrictions are gone, and I am curious what the future will bring.

What category definitions mean?
Here is an explanation from the official EU sources: