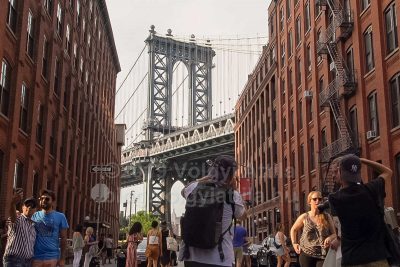 An interesting legal debate started when Steven Spielberg (employees) didn’t allow a photographer to take paparazzi photos of a movie shooting on the streets of New York. Security guards did everything they could to prevent photographing the movie shooting. They installed blockades, canvases, privacy screens and held umbrellas in front of the photographer to block his view. Photographer in return sued the movie company for infringing First amendment rights as New York streets are private property and it is part of freedom of speech to take photos of things happening on the streets.

All this legal debate took place on New York streets and the US court system, thus it has to be observed considering the local laws. I also wrote on my Hungarian of blog about regulations of taking photos in public spaces in Hungary (unfortunately it is currently not yet available in English). However Hungarian and US laws hame some similarities in the importance of freedom of speech and protection off discussing public matters. There are also many differences in the body of laws themselves as well as the structure and thinking of the legal system. Just to mention one important difference in Hungary we don’t have case law and more importantly, continental European legal system has a much higher emphasis on protecting personal rights. This also means quite probably a similar case in Hungary would result in a different solution. However, especially mentioning case law this New York case was also settled with an agreement of the involved parties instead of a court ruling. So there is no guarantee to another similar case to end with the same outcome. I think it is not a coincidence the judge urged an agreement instead of making a court order as it would have an entirely different influence on other similar cases in the future.
That is also very interesting the movie company didn’t even try to claim the protection of their copyrights in the case. However strong claim it could be in this story considering the sets, costumes, choreographies are protected by copyright. Copyright considerations would also apply for details of the movie shooting getting and publishing them in the media before the premiere could hurt the integrity of the movie as well as spoilers can ruin viewer experiences – yet they didn’t even try to use this claim.

On my blog I previously wrote about the Ansel Adams act proposal, aiming to widen protection to the freedom rights of photographers and to make certain regulations more clear that are often interpreted to restrict photography. I also wrote on my blog about another legislation attempt to restrict photography freedom similar to Hungarian regulation. In the end, this proposal was sent back to the senate and did not come into effect.

Didn’t let him take photos
NY Post wrote about the unusual lawsuit after their former coworker JB Nicholas was not allowed to photograph and thus to report about a movie shooting that took place on the streets of New York. Just like it is quite common in the movie industry the security guards tried to block the view onto the set and the shooting with sheets, privacy screens and umbrellas. As you can see it on the video published by NY Post there has been an exchange of words between the photographer and the security guards, but they stayed well in civilised manners. The article, however, cites lawsuit documents indicating security guards shook a ladder some photographer was standing on to take photos above the privacy screens. This is also not a bloody violent act, however, it is much closer to physical threat.

The photographer filed a lawsuit
Nicholas first sent his complaints to the mayor’s office and Amblin Entertainment, the movie company performing the movie shooting. He alleged using the privacy folds was illegal. The company relented the screens and started using waist-high metal barricades instead.
After security guards obscured his view to the sets with umbrellas, Nicholas (representing himself) went to court. In his lawsuit he asked the judge to issue a temporary restraining order to bar the company from using privacy screens, to order anyone not to take photographs and to interfere with anyone trying to take photos in the public. US laws say in public anyone can take photos and it cannot be prevented even in such cases. Especially considering such a movie shooting in a big city is of considerable public interest. Interfering with it confronts with the First Amendment rights of the photographer.

Elizabeth McNamara, lawyer of the movie company claimed the photographer “was inside the screens and he was shooting photographs literally just feet away from the actors that were singing ‘Maria,’ […] “I don’t think there is any evidence in this record that he has actually been interfered with”. The photographer replied  “I was told that I could not be there. We are not allowed to take pictures here.”

Manhattan Supreme Court Justice Joan Madden brokered a compromise after a private hearing of the parties in her chambers. In the end, Amblin Entertainment accepted in writing that they won’t interfere with Nicholas photographing three future film days and they also promised to appoint a liaison to help to resolve further conflicts should any such arise on site. Amblin also agreed to pay the costs of filing the lawsuit indicated by the documents to be $400. After the agreement, the photographer told his former employer NY Post “The people of New York have the right to photograph whatever happens on their streets, […] With Judge Madden’s help we were able to reach an agreement that vindicates the right to photograph on the street.”

The photographer has another open court case against the city that alleges the mayor’s office to wrongfully approve film project permits without the required legislative approvals.