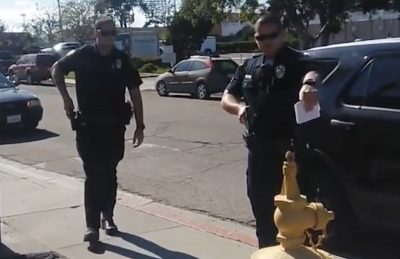 A San Diegoi police officer unholstered his gun because he was unable to decide if a camera or weapon is aimed at him by a cameraman. The frighetned photographer resisted to put  down the camera, but in the end the conflict ended without gunshot.
US sites mostly shared this story as an example for the restriction of photographers’ rights, abuse and police brutality. However it is also a very important to think about how you communicate with officials.

I wrote quite some times about similar situations (unfortunately most of these post are only available on my Hungarian blog and no English translation of them is available yet) when police officer attacked photographers in various situations because they didn’t recognise he is only photographing and not attacking them, thought a phone to be a weapon, photographed a protest, was just there, photographed White House. Someone even died because of injuries during a clash. I also wrote aboutprotests for photographers’ rights and emphasize photographers aren’t terrorists. UK police officers even got a training to know their rights and don’t harass photographers without a legally founded claim.

San Diego officer drew his gun
It is a ffairly old recording that sttarted circulating on US photography sites again. The recording made in 2018 shows San Diego police officer James Everette during a routine patrol. He tells the photographer to put down the camera because he cannot decide what it is in his hands.

The cameraman maybe a bit too well educated about the civil rights of photographers is not the most calm and polite in this situation. He starts shouting and calling the police officer tyrant, then he starts to argue with him about his constitutional rights to record the events. In the heat of the argument the excited police officer draws his gun to force the cameraman to cooperate. This of course makes the cameraman more nervous and he cites his rights to record the events even louder. The police officer asks for reinforcement and the arriving officer also reaches for the weapon when he sees the other officer armed…

The argument ended without the use of the weapons. The video started to spread on the web as an illustration of police officers harassing photogrpahers. PetaPixel wrote the officer was “placed on administrative leave pending the outcome of an internal investigation” and since then he returned to active duty. NBC7 writes a police spokesman said police  “took appropriate action consistent with the findings” but all further details are “confidential personnel matter”.

Moral of story
It is important to be aware of your rights. The mean time a lot of similar stories have the conclusion it is also very important how you communicate with officials and complaints!