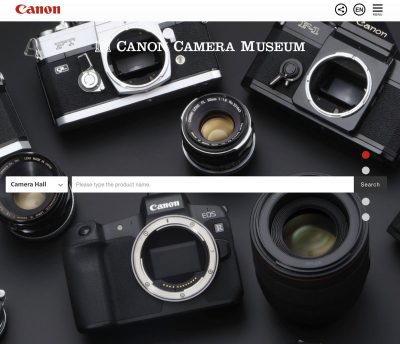 Canon launched a virtual camera museum on its website. Here you find all their still and video cameras just like all their lenses dating back to their launch in 1930. They made a really interesting collection that gives a historical overview of all they produced during the decades.

Of course, the Canon product archive is far from being the very first such database in the history of the Internet. Also, similar historic fact bases also exist and there are a plethora of sites aimed to help consumer decisions. In Hungarian I only know Pixinfo’s camera database and even if it does exist it is probably not as long-standing and wide scale. In English, there is a much larger selection of such pages. As probably the biggest ones DPreview not only made a historic timeline of all the cameras of all the manufacturers, but they also made a camera compare site to help buyer decisions. As camera phones have an ever-tightening grip on the camera market, they also included camera phones in their database for quite a while, just like DXOmark did. We cannot say Canon’s museum site is a totally new thing, but it is a really interesting source of information on their own products for sure. 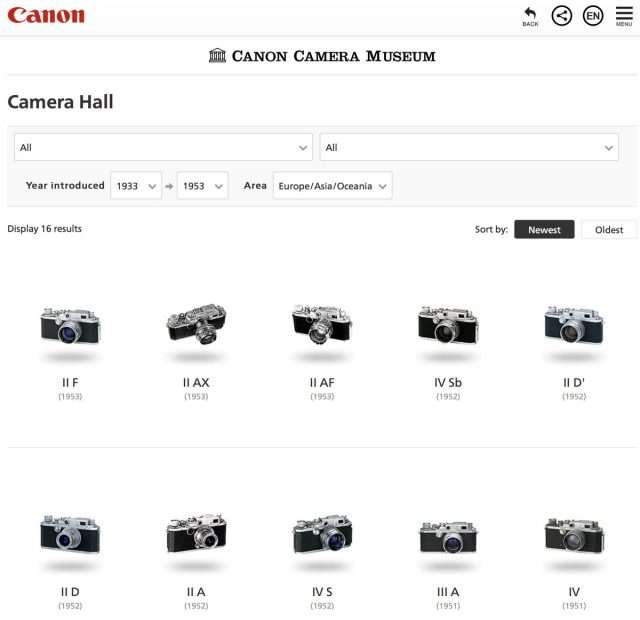 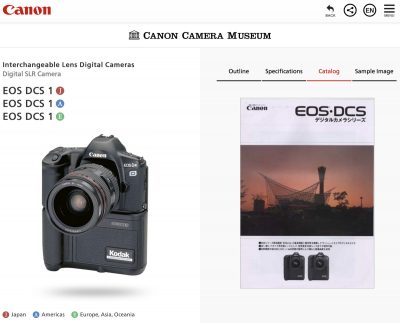 However they don’t have all the information available for each of their older products, but most of them have more than just a photo and a product ID. Most of the products have their official descriptions and technical specifications included. In many cases, they also included some or all of the brochures, marketing materials and some times for the digital cameras even a few test photos too. The site is not only for the still cameras and camcorders, but the complete assortment of lenses with various connections are portrayed too. Alongside the product introductions, they also included some videos to give a deeper historical background for those interested in various technologies used by the company.

Canon Camera Museum drew my attention in the announcement I received celebrating the production of the 100 millionth Canon EOS body. That is, of course, aligning with the trends (and marketing interests too) comes from the EOS R family – just like with the previous announcements always include to mention the currently celebrated product came of course from the latest and greatest model the company offers at the moment of announcement. Such round numbers always give a great opportunity for the marketing people (just like journalists and bloggers alike of course) to quote the milestones and quantities of the brand.
A few times I too wrote about these numbers on my blog. Last time in 2014 the 70th million EOS body was the occasion. This makes math not too hard to calculate in the past 5 years Canon made 30 million EOS bodies. (In the Hungarian version of the current announcement they mistakenly changed produced numbers to sold numbers in a translation error as the English version of the statement clearly says production numbers, just like the previous ones too.) 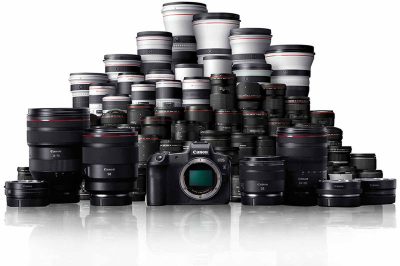 I also wrote some thoughts about the millions of products manufacturers like to brag about and how much sense it makes for us to care about them on the occasion of the announcement about 90th million EF lenses in 2012. Since then this number also raised quite a lot and mid-2018 they celebrated 140 million EF lenses produced. Based on the series of announcements I assume the number grows 10 million each year.

What do you think about the 100 million EOS cameras and 140 million lenses produced? – I would ask if my blog would not be affected by a temporary shutdown of commenting without a short term solution for the issue at hand. So please leave your comments on the Facebook page of the blog!

EOS Series Cameras
Boasting an attractive product line-up that caters to a variety of genres, skillsets and requirements and an extensive range of over 70 EF and EF-S lenses, Canon strives to expand the boundaries of imaging expression. The EOS series has supported many users, from entry-level through to professionals over its long history, and enabled Canon to maintain the No. 1 share of the global interchangeable-lens digital camera market for 16 consecutive years from 2003 to 2018.ii

In March 1987, the EOS series began with the EOS 650, a next-generation AF single-lens reflex (SLR) camera featuring the world’s first fully electronic lens mount. Production of the EOS series began in what was then Canon’s Fukushima plant and now takes place at a variety of locations – including Taiwan, Miyazaki, Nagasaki and the lynchpin Oita Canon – where production is now carried out under stringent product quality management. Following the release of the EOS 650, Canon went on to develop innovative products and technologies that put speed, comfort and image quality at the forefront – such as the high-end EOS-1 released in 1989 and the EOS 500, which was released in 1993 – expanding the EOS series to cater to many users, from amateur to professional.

In the early 2000s, as the pace of digital SLRs (DSLR) adoption picked up, Canon sought to create even more appealing products. The EOS series’ core concept was expanded to include “high image quality,” achieved through proprietary, cutting-edge technology such as Canon-developed CMOS sensors and DIGIC image processors. The EOS 300D – a compact, lightweight DSLR with an affordable price – contributed to the wider adoption of interchangeable-lens digital cameras, for consumers. Both the EOS 5D series and 1D series expanded digital EOS to professionals – specifically, the EOS 5D Mark II introduced DSLRs as valid means for movie capture and independent filmmaking. Whilst the establishment of the Cinema EOS System of professional digital cinematography products in 2011 extended Canon’s video technology to the B2B sphere entering the video production industry.

Canon will continue to explore new approaches, building on the success of the EOS cameras and the original EF mount, which gave photographers and filmmakers versatility when shooting – such as the 2018 launch of the EOS R System, which employs the new RF Mount. Expanding imaging areas – from still photo to the realm of video – the EOS Series across bodies and EF lenses supports a wide range of users, from entry-level through to professionals. Speed, comfort and high-image quality will all continue to be at the core concept of the EOS series, further strengthening the EOS System towards expanding the culture of photographic and video imaging.