Not just our electronic gear but all of the often-used things can be a breach on our attempts of infection prevention. Phone, headset, earphones, but many more traditional things like glasses, keys, pens, money, bags, and crutches can help viruses and bacterias to spread. We don’t even think about how many things can spread infections because we would never think about sterilizing them…

I didn’t want to join the common fear-mongering related to the current coronavirus outbreak, but the more news spread about it and the more scared people are I miss this thought the more from preventive thinking. Let’s share it to reach more people!

Hand sanitizing is the first line of defence
More and more news sites write washing hands often is the main protection against the Corona virus. This obvious advice is very important even if there is no epidemic or we use any other protections alongside too. The thorough and frequent hand washing comes first in the list and nothing can replace it. Many research proves the tremendous decrease in international death tolls thanks to washing hands. What do you touch after washing hands?
It is rarely mentioned connected to hygiene, it is not enough to wash your hands if you keep using the same things after washing hands as you were before – without cleaning them from germs. How many times do you wash your hand a day? Even if you do it often, probably not often enough. But how about the most used belongings you take with yourself everywhere? The ones you keep using after hand wash just like you did before washing your hands.

Smartphones became an integral part of our lives and it puts them on the first place on the list, but it is far from being the only one worth a thorough cleansing. We had quite some items in arms reach all the time back in the era before smartphones and we still use most of them every day – maybe somewhat less than with the mobiles. We take these items with us everywhere we go, often even keep them together in our pockets or bags. We don’t often – or maybe ever clean them, however.
Many such items are listed at the end of this post, but I would add newspapers, books, school- and shopping notes too. We may change these more often than others. In better cases (at least with newspapers and grocery lists) we dump them in the trash after a shorter time. In worse cases, we put them on a bookshelf or maybe lend them to some friends or even sell them including all the germs we collected with them. But at least with these items, we don’t take the same one to everywhere all the time.

How we transfer germs?
We walk on the streets, shops, public transport, touch a lot of door handles, handlebars and hands of others when we greet them (I never liked handshakes, but it is especially advised to skip during an epidemic. Some companies already started circulating notices about avoiding handshakes with the motto “Smile is the new handshake.”) During our daily activities we also use our phone, glasses, wallets, bank cards, headphones. We put things into the bags we carry and use a stick or crutches to support the movement. Once this is a photography blog may I also add we use cameras, maybe even a tripod, some times we change lenses and filters or a card in the camera, etc.

We wash our hands once we get home or maybe even sanitise somewhat more often, but right after we washed hands we grab the same things we were holding before. Without even giving a thought when was the last time we did clean those other objects and what they may be holding onto. One might be clear having no smartphone or rarely using it, but even the least modern items have quite similar use cases and we also use them in similar situations without ever cleaning them. It may be an eyeliner, pocket mirror, rouge, a cigarette lighter or a very ecologically friendly and trendy bottle or lunch box. But as I already mentioned keys, coins, banknotes, ID cards and their holders, even hand or other bags and aids of our hearing or sight can be similar. Not to mention plush and other toys of children.

Do not overdo it!
Prevention is important, everyone should do it on their own demands. I don’t say you should be cleaning everything all the time. During times of increased virus danger, it is worth at least (regularly) wipe things with a sanitiser in addition to washing hands. Wearing a face mask and stocking survival food reserves may not be the most important and obvious things to do to prevent virus infections.

Avoid unnecessary touch
Don’t overdo anything, but it is worth to avoid any unnecessary risk. For example where you can pay with your bank card, it is better than using cash. Especially better if your bank card has PayPass option that allows contactless payment (fun fact in my native language Hungarian they are called touch payment – that is exactly the opposite meaning to contactless). PayPass allows us to avoid handing out our card. More than that we don’t have to touch the terminal. We only have to hold the card close to the terminal (about a few millimetres). These cards don’t even ask for a PIN code with smaller value payments (5000 HUF in Hungary). The PIN code is only required for larger amounts. Using a smartphone or smartwatch that allows connecting them to Apple Pay or Google Pay offers an even better solution. In such cases, it is not even needed to use the terminal for PIN entry as unlocking the payment in the phone gives enough security. However, it needs to be noted there is quite some chance any shop cleans their pin pads more often than you clean your phone or keys. 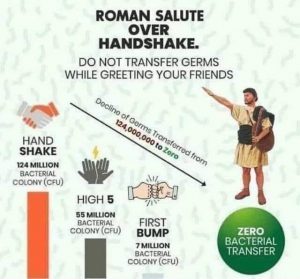 Avoid handshakes too
I didn’t originally want to write too much about handshakes. I only noted the fact I never handshake. But it became a trending topic and various approaches arose suggesting rather avoid handshake during epidemics. In addition, I met unexpected handshake offers more than ever since the virus outbreak.
Some suggest to use the roman salute instead of a handshake, but it is easily misunderstood because of other historic ties, I would not suggest this form.  A Cnet article suggest using the hand salute used by Star Trek character Spock (who also has photography connections). I like the “Live long and prosper” quote in connection to an epidemic situation, but this hand position is quite hard for many and really unnecessary. Maybe just nod or wave with your hands instead of a handshake. I also got word of some Swiss places offering “smile is the new handshake”.

Cough, sneeze – cover your mouth with your hands
It should not be told, but it cannot be emphasized enough (and there are always people who need to be told) when coughing or sneezing you shall always put your hands in front of your mouth. When you sneeze the air can travel with 120-190 km/h through your mouth and the small droplets of saliva contain thousands of pathogens that spread very easily this way.
Whenever you are able, you should have a handkerchief in your hand to collect the bacterias instead of your hands. You should, of course, trash the handkerchief and wash your hands afterwards before you start touching things. More than this you should also tourn away from people when you sneeze not to have them in the spray area. Of course, it can be harder in dense crowd, but you can still try to turn into the direction of fewer people and cover your mouth as much as possible.
In the risk of infection, this is why people start wearing a face mask to decrease the spread of exhaled pathogens.

Update: It is a surprising coincidence that NBC News and based on their article Hungarian news site Index also wrote about mobile sterilization just same day when I posted this. I mean it is surprising they didn’t write it earlier.
Since I received some reader feedback suggesting this, I have to write I don’t think any of them would have borrowed my idea. Index (and many Hungarian sites) quite often borrow ideas and other information from my blog, but they always credit me as the source of their information.