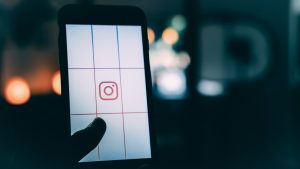 In a US copyright case the judge ruled against the photographer saying websites may embed photos shared on Instagram, instead of paying for use of the photo. The rulinng is very in teresting because another similar case was resolved in an entirely opposing ruling. What regulates social media photo embeds in light of the two rulings?It is more obvious than it seems at first.

However it has a top place in the line of photo thieves’ baseless excuses, also EU court ruling states it, a photo pbulished on the web may not be saved and uploaded to a new place without breaking the copyight owner’s consent. Even top dollar compensation was granted to a photographer in a (more or less) similar case. You don’t even have to copy+paste or share dumb hoaxes (which ones wouldn’t overwrite terms of service anyway). Embeding of photos however seems to be a bit more complicated legal situation – but it isn’t.
The question is as old as social media and the answer lies in the terms of service for as long time as well – you know, the one everyone clicks OK without reading it first: as long as the photo stays in the system of the social media site and only the embed feature of the site is used to display on another website it is legal – but only if the legal rightsholder uploaded it to that social media account and not any other third party who had no right to do so. 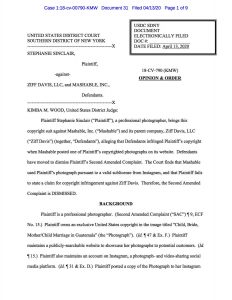 2020 court case of Sinclair vs Mashable documents in 9 pages
Click image for more!

2020 ruling says embed is ok
Federal judge Kimba Wood made a ruling this Monday that suppots embeding photos – rejecting the lawsuit of the photographer. Stephanie Sinclair is a professional photographer whose images appear on the pages on National Geographic, New York Times and Time magazine. Along them she also actively uses social media to portray her work just like any other photographers do these days. Mashable contacted the photographer to licence one of her photos taken in Guatemala to be used in their article. The photographer wasn’t satisfied with the $50 offer of the magazine, so she did not permit the use of the image. But the website did embed the photo from her Instagram feed without her permission. This is why the photographer filed a lawsuit, but her case was dismissed. The ruling states the magazine lawfully embeded the photo and the photographer may have no legal objection against embeding.

As the Hollywood Reporter article says, in such cases a so calledd server test is used by court, to determine, on which server the photo in question is found. This guideline says if the photo is where the legal owner originally put it, then no breach of copyright hapeened. On the other hand if the file was copied from its original place on the social media site and is now available on the server of the news site, then copyights were breached. (I simplify the essence of course).
Judge Wood now used exactly this test in the Sinclair vs Mashable case and this method is part of the decision Mashable did nothing illegal.
The photographer says “it is unfair for Instagram to force a professional photographer like [her] to choose between ‘remain[ing] in “private mode” on one of the most popular public photo sharing platforms in the world,’ and granting Instagram a right to sub-license her photographs to users like Mashable,”

The judge admints “Unquestionably, Instagram’s dominance of photograph- and video-sharing social media, coupled with the expansive transfer of rights that Instagram demands from its users, means that Plaintiff’s dilemma is a real one. But by posting the Photograph to her public Instagram account, Plaintiff made her choice. This Court cannot release her from the agreement she made.” 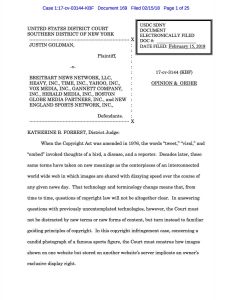 2018 court case of Goldman vs Breitbart documents in 25 pages
Click image for more!

2018 ruling punishes who embeds a photo
This current case gets really interesting, in contrast with another lawsuit two years ago also taken place in New York. Then federal judge Katherine Forrest dismisseed to apply the server test in the Goldman v. Breitbart case. She ruled the news sites breached the copyrights of the photogapher by embedding a photo from Twitter and they have to take the responsibility for this. Seemingly exactly the opposite decision than made now – but not so much.
In that case a photo taken about US football player Tom Brady was shared by someone on Twitter and news sits lost their case for embeding this photo. Judge Forrest then said it is totally indifferent if the photo was on the server of the news sites or on Twitter’s. In the ruling the judge states contrary to Google image searches the news sites did not perform an automatic embed, but editors handpicked the photo and made a manual action of code editing to embed the photo into their site. This action was conscious and intentional thus they have to take the responsibility for it and it cannot be blamed onto Twitter, only because the photo was shared there. Why? It is far from being surprising.

Why they ruled in different ways?
Hollywood Reporter is a bit(?) sensational when emphasizes how much different the two rulings are yet they don’t share the big difference off the two cases what holds the answer to the raised question. They forget to mention in the case of the Tom Brady photo the picture wasn’t uploaded to Twitter by the photographer Justin Goldman who sued the newspapers for embedding it. The photographer shared his picture on Snapchat and others saved it from them and others shared it on Twitter without the permission of the photographer. This is a small detail of the story, that simply changes all of the legal standings, and it also the answer why the judge made an entirely different decision in this case.

In this older story the photogapher did not give any permission to publish the photo on Twitter. The mere upload of the photo to Twitter was illegal and breach of his rights. Because of this he  did not permit the embed of Twitter posts either. Thus the Twitter terms cannot waive liability of the news editors. Unlike the new Instagram case, where the photographer herself uploaded her photo to Instagram and with this she did give the permission anyone to embed it using the Instagram povided embed tool. This is a huge difference between the two cases that are only similar at first sight.

Hollywood Reporter complains because the older case of “Goldman v. Breitbart gets only a brief mention” in the new Instagram case documents. However they miss to quote that brief mention (actually the second one in the nine page court document) emphasizes “Because the Court fifnds that Instagram granted Mashable a valid licence to display the Photograph, it need not reach the question, addressed in Goldman but unsettled in this Circuit, of whether embedding an image constitutes “display” that is capable of infinging a copyright in the image.”

How a Bralzilian woman got on Budapest posters?
Click image for more!

Moral of the story in short is, what I started with: embed is legal, but only if the photo was uploaded legally. This conclusion reminds me to the story of Hungarian Opera using billboad with a photo of a Brazilian woman without her knowing about it.

Update: The topic itself suggest, how cool it would be to embed the court documents into my post, but my blog has some poblem with Scribid’s embedd code and it doesn’t display right.  You can read both documents clicking on their images in the post. Thankfully court documents are not subject of copyright so this is also a legal solution this way.